A church shaped like a giant version of Cinderella's fabled glass slipper has been built in Taiwan to entice female visitors.

Over 320 tinted glass panels were used to build the 16-metre-tall high-heeled shoe, which was constructed by the local government of Taiwan's Southwest Coast National Scenic Area.

The church will not hold ceremonies, but is to be used as a venue and backdrop for couples' pre-wedding photographs – a popular tradition in the country.

"We want to make it a blissful, romantic avenue," the administration's recreation section manager Pan Tsuei-ping told the BBC. "Every girl imagines how they will look like when they become the bride."

Although it is not clear what is inside the building, a stage is located in the opening of the shoe, about halfway up the structure. 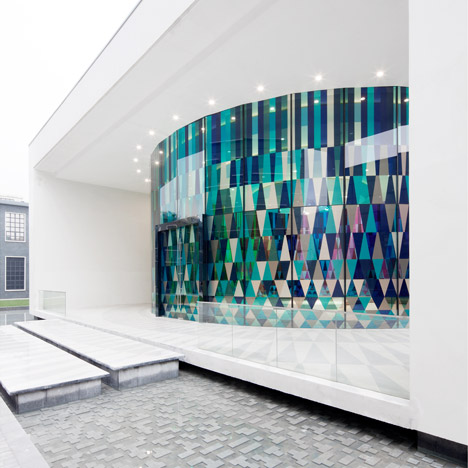 According to local media reports, a government spokesman said the building would be geared towards attracting women.

"There will be 100 female-oriented features in the church like maple leaves, chairs for lovers, biscuits and cakes," said Zheng Rongfeng.

The project was reportedly inspired by a local story. In the 1960s, a 24-year-old girl who suffered from Blackfoot disease had to have both of her legs amputated.

This led to the cancellation of her wedding, and she remained unmarried and spent the rest of her life at a church.

The glass-slipper church is set to open before 8 February 2016, in time for Chinese New Year.

Asia boasts a variety of unusual wedding venues. In Japan, couples can get married a chapel with rainbow hues cast onto its walls or a spiral-shaped building encircled by two curving staircases.

Over in China, options include a cylindrical registry office that looks like it's been showered with confetti and a structure with a distinctive V-shaped roof.