Couples with a love of stained glass can now get married in a kaleidoscopic wedding chapel next to a Shanghai glass museum (+ slideshow).

Designed by Chinese studio Coordination Asia, the Rainbow Chapel features a multi-hued facade made up of over 3,000 glass panels, displaying 65 different colours.

These create a 6.8-metre-high cylinder that transitions like a rainbow from warm tones of red, orange and yellow, down to shades of green, blue, purple and pink.

According to architect and studio founder Tilman Thürmer, the aim was to create a wedding venue to suit young and creative couples, serving as an alternative to China's more traditional venues.

"There was a lack in the Chinese wedding market that mainly offers city-centre locations and classic settings, and we went on to fill that gap," Thürmer explained.

The building is located at G+ Park in north Shanghai – a museum cluster designed by Coordination Asia that also includes the Shanghai Museum of Glass and the Kids Museum of Glass.

"Over the years of operating the museum park we experienced an increasing demand to have a new type of venue that caters to the Chinese public, now avid for living a creative life, gathering new and exciting experiences and mixing art and lifestyle," added Thürmer.

Standing over a shallow pool of water, the 390-square-metre building is framed by a rectilinear white structure with a wall on only one of its four sides.

The colourful glass cylinder is positioned at the centre of this cuboid, illuminated by lights embedded in the overhanging roof.

"The two basic shapes – square and circle – are fundamental to Chinese symbolism," said the design team in a statement. 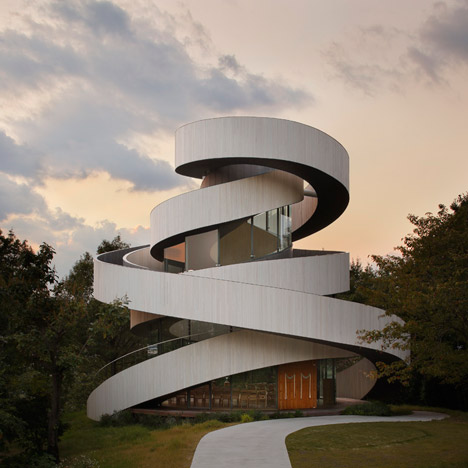 "The circle represents fullness and unity, while the square stands as a symbol of honesty and virtue; when combined they lend a sense of perfection and provide the place with good luck."

Flooring is patterned with pale grey triangles and squares, echoing the shapes of the glass panels.

Contemporary wedding venues have become increasingly popular in Asia in recent years, and architects have been creating inventive examples both in cities and in the countryside.

In the last year, Tokyo-based Hiroshi Nakamura has completed a ribbon-like chapel on the Hiroshima coastline, while in 2012 Chinese firm Urbanus unveiled a Shenzhen registry office that looks like it has been showered with confetti.

Photography is by Coordination Asia.