The undulating stainless-steel cladding added around the old station is based on the distorted shapes seen from moving trains.

Warped reflections of the train tracks and surrounding plaza are created by building's curving form and reflective cladding.

Large "eye-shaped" screens have been integrated into the facade to mark the four main entrances.

"The geometries of motion and the distortion of perception produced by movement have been the inspiration for the architectural expression of the project," said the architects. 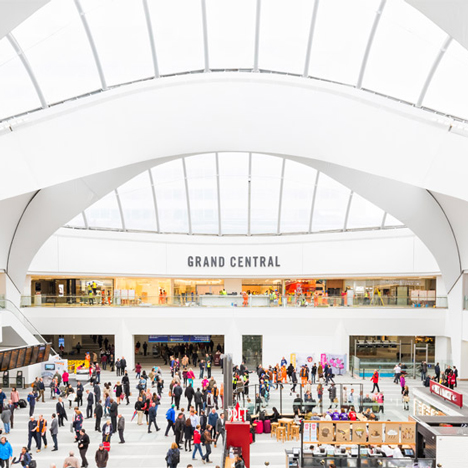 "The bifurcating, undulating, smooth forms of the track field have been transferred and embedded into the geometry of the building to ornate the city and to convey its historical character as a transportation hub, where various traffic systems – such as the famous canals and the roman roads converge and overlay."

The curving aesthetic continues into the interior, where a large atrium above the station concourse is topped by seven domed skylights made from transparent ethylene tetrafluoroethylene plastic.

But when the station reopened in September 2015, Zaera-Polo criticised Network Rail for a "serious strategic mistake" in changing some of the interior materials for the project.

The firm, which Zaero-Polo set up with his now ex-wife Farshid Moussavi, was also behind the design of a tile-covered building with porthole windows for London art school Ravensbourne College.

FOA disbanded in 2009 following the couple's split and Zaero-Polo set up his own studio in 2011, retaining the contract for Birmingham New Street. Llugano joined as a principal in 2013 to form AZPML, which now has offices Zurich, London and Princeton.