Christ & Gantenbein has unveiled its new wing for the National Museum Zurich – an angular concrete edifice conceived by the Swiss architects as a robust and spacious "museum factory" (+ slideshow).

Set to open to the public in July, the new wing provides exhibition galleries, an auditorium and a library for the 118-year-old museum, which houses the largest collection of cultural and historical objects in Switzerland.

The raw concrete was chosen by Christ & Gantenbein to stand in stark contrast to the historical stone structure, planned by architect Gustav Gull in the late 19th century.

But the volume is intended to complement the shape and massing of the old building. It adjoins it in two places, enclosing a courtyard in between, and mimics the forms of the original roofscape.

"The old and new buildings are directly coupled to each other so as to form an architectural and urban ensemble," said Christ & Gantenbein, whose other projects include the proposed extension to the Kunstmuseum in Basel. 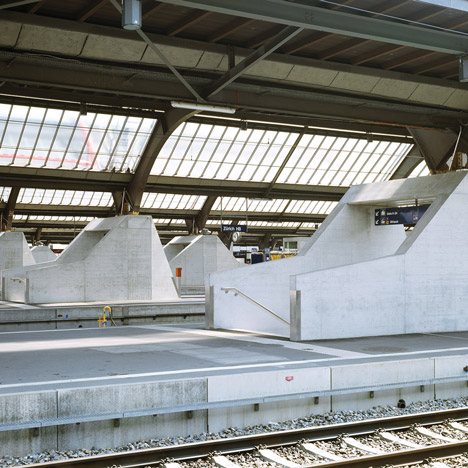 "The expressive folds in the rooftops can be understood as a contemporary interpretation of Gull's articulated historicism," added the firm. "The new is thus inconceivable without the old, but is nonetheless unmistakably modern."

The new wing faces onto Platzspitz Park. Its central section is raised up, creating a bridge-like form that ensures the courtyard is still connected with the park.

Inside, the bridge contains a monumental staircase leading up to the galleries.

The 80-centimetre-thick concrete walls are left exposed both inside and out. Flooring is also concrete, polished and inset with aggregate to reference the decorative terrazzo floors in the old building.

"Concrete dominates in the interior of the new museum," said the architects. "Combined with the technical elements purposely left exposed on the ceilings, this creates an almost industrial-like atmosphere that is robust, spacious and open to a variety of forms of exhibition and presentation."

"The new spaces at the National Museum Zurich are conceived as museum factory halls – conservational and at the same time experimental," added the team.

The wing accommodates a new entrance, along with visitor facilities including a shop, a restaurant and bar, and cloakrooms.

The project also includes the refurbishment of the old building. The museum is expected to fully reopen in 2020.

Based in Basel, Christ & Gantenbein is led by architects Emanuel Christ and Christoph Gantenbein. Other projects by the firm include a bone-like tower of concrete along La Ruta del Peregrino, a 72-mile pilgrimage through the mountain landscape of Jalisco, Mexico.

Photography is by Roman Keller.