Inside Festival 2015: Rob Backhouse of Hassell explains how the architecture firm's office building for insurance company Medibank is designed to promote a healthy lifestyle amongst staff (+ movie).

It features a park, indoor football pitches and tennis courts, as well as 26 different types of workspace to discourage employees from spending all day sat at the same desk.

"The idea of mobility and physical movement was expressed right through the architecture and right through all of the setting types that people can work at," Hassell managing director Backhouse explains in our latest movie for Inside Festival.

The workspaces are spread across different levels of the 22-storey office block, connected via a brightly coloured staircase that snakes through the centre of the building.

"All through the building, the idea of the atrium with the stair system was about movement," Backhouse says. "It's about getting people moving, not using lifts."

The office features a mixture of private and more collaborative workspaces, which Backhouse says are designed to promote mental wellbeing as well as physical health.

"There are retreat and rejuvenation spaces where you can escape the intensity of some of the more collaborative work zones," he explains. "So there's actually that balance. It covers all of those bases – physical, mental and social health."

Backhouse says that Hassell took a novel approach to designing the building by encouraging its teams of architects and designers to work on aspects of the design outside of their usual specialism. 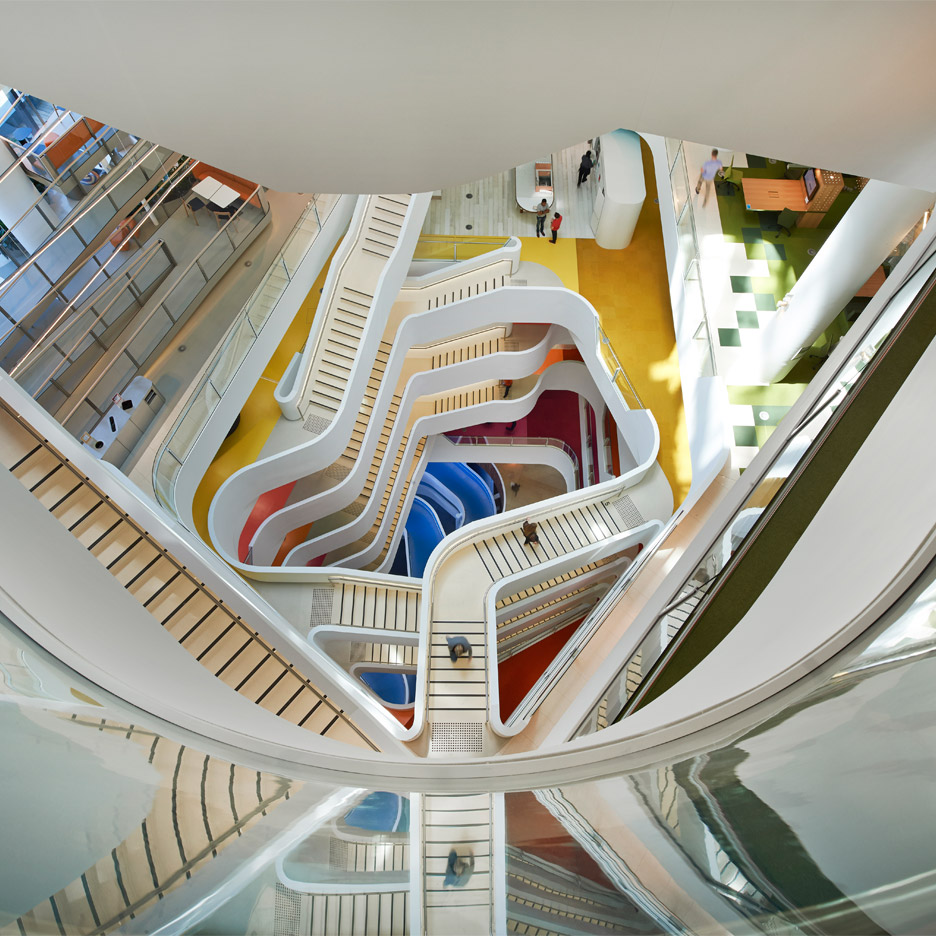 "The client wanted more creative minds involved than maybe you would normally do in conventional commercial architecture and interior design," he explains. "We decided to use our landscape architects to start planning the interior. We had interiors designers working on the structure, the stairs, the atrium."

Backhouse compares the approach to musician and producer Brian Eno, who has experimented with unfamiliar instruments throughout his career.

"It's kind of that Brian Eno model of swapping instruments so that you actually start to create some innovation and some difference in how you approach the design and what you're doing creatively," he says.

The project was completed in 2014. Hassell claims that a survey of Medibank staff found that 79 per cent said their new building made them feel more collaborative, 70 per cent felt healthier and 66 per cent felt more productive.

"Since Medibank moved into the space, they've had great increases in engagement," Backhouse says. "People say that they feel healthier, more productive and can collaborate better."

"A lot of this is kind of touchy-feely, but it's that idea that successful organisations need to look after people to be high performers."

This movie was produced by Dezeen for Inside Festival. It was filmed at Inside Festival 2015 in Singapore. All photographs are courtesy of Hassell, unless otherwise stated.

Inside Festival 2015 took place in Singapore from 4 to 6 November, alongside partner event World Architecture Festival. Dezeen is media partners for both events and will be publishing more video interviews with the category winners over the coming weeks.

More from Inside Festival 2015