The London-based architect's additions to the Silene collection include rings and cuffs in different colours of 18 karat gold.

Silene Ring I is available in pink, yellow and white gold. White diamonds form trails between the irregular shapes across the surfaces of the pink and white versions, while black diamonds trace the outlines of the yellow gold ring.

Each measures six centimetres in length, with a hinged join in the centre to accommodate a bending knuckle.

The Silene Ring II comes in the same variations of the metal, as well as oxidised white gold, but features a web-like pattern that spreads across the finger when worn.

Another ring has a similar shape, but the gaps between the pink gold are filled in with white diamonds.

Two additional cuffs comprise thin lattices that emanate from a central solid oval shape. The larger of the pair is made from pink gold, while the smaller version comes in yellow gold. 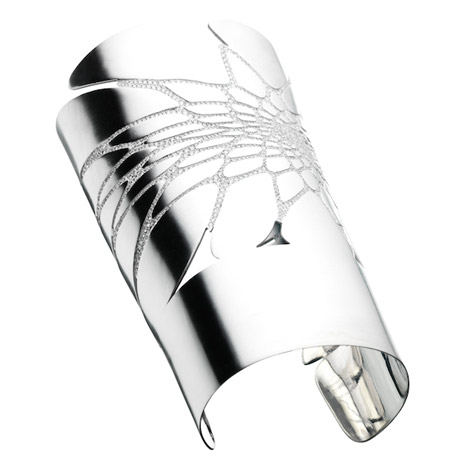 The House of Aziz and Walid Mouzannar was founded in Lebanon during the 18th century, and is now run by sixth-generation designers Dori and Alia Mouzannar.

Their working relationship with Hadid began in 2014 when the architect designed the Silene cuff, which is set with 1,048 white diamonds.

"Our collaboration with the House takes full advantage of Alia's expertise and Dori's knowledge to explore the beauty of natural forms and the unique properties of its materials," Hadid said.

"We chose to collaborate with Hadid because she is a great artist, a friend and our visions are aligned," said Alia Mouzannar. "It is a very contemporary collection that involves a very strong spirit, which is rich and feminine yet delicate."

The jewellery is on display as part of an exhibition showcasing Zaha Hadid Architects' product designs in Dubai, including furniture designed to look like ice formations, a set of carved marble vases and sofas based on natural rock formations.

Organised by New York's Leila Heller Gallery at its space in the UAE city, the show runs from until 29 February 2016.

Hadid has worked on a number of jewellery designs, including latticed gold filagree rings for Caspita and a series of sinuous pieces for Swarovski, but is best known for her landmark architectural projects such as the Heydar Aliyev Center in Baku and Dongdaemun Design Plaza in Seoul.