German studio Von M has completed a slatted timber building with a fragmented roofline to house a kindergarten in the German city of Ludwigsburg (+ slideshow).

The Stuttgart firm converted and extended an existing residential building in the Poppenweiler district of the city to create the Kinder und Familien Zentrum.

They affixed a new 1,425-square-metre kindergarten to one side of an existing block that now houses a family centre.

To reflect the scale of adjacent farmhouses, the new block is split into five segments, each with its own roof that is pitched in an alternate direction to the one before.

The existing structure was stripped down into a "concise" form by removing the building's bay windows and overhanging roof, and new openings were established in line with those in the additional building.

The materiality of the timber slatted building contrasts the existing building, but its form and consistent window dimensions help to visually tie the two together.

"The new building clearly speaks its own contemporary language, but also proportionally takes materiality motifs from the environment," said the architects. 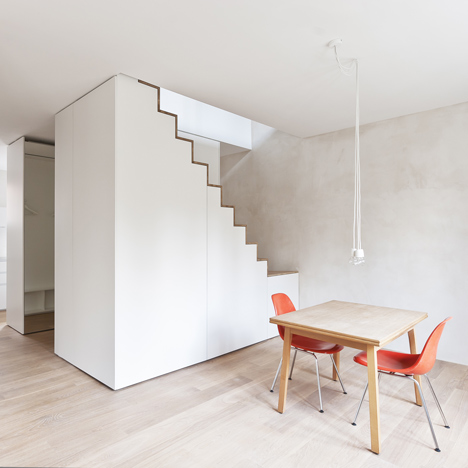 "Despite the clear demarcation of material and construction caused by new and old buildings, the new lot confidently asserts itself within the heterogeneous environment, consciously picks up its rural character and is reinterpreted."

"Suitability for children often gets confounded with infantility," the architects told Dezeen, "which ends up in a mess of primary colours and ridiculous forms."

The original staircase connects to a new circulation core, linking the old and new parts of the building on their staggered levels. Mesh balustrades create visual connection between floors, which are naturally lit by large skylights and windows.

The existing layout is largely retained through the family centre, which is used to host prenatal classes and administration offices.

"Our aim was to give a friendly, generous and light-filled, but also restrained space to the children to evolve themselves – a space that can be filled with life and be 'taken' by the children," the architects told Dezeen.

"What made us proud and happy was the fact that the kids did not want to go home when they spent their first days in the new building," they added.

Photography is by Zooey Braun, unless stated otherwise.