A pair of museums entirely dedicated to French fashion designer Yves Saint Laurent's life and work are set to open in Paris and Marrakech in 2017, including a new building by Studio KO (+ slideshow).

Both museums will present a portion of the Fondation Pierre Bergé – Yves Saint Laurent's collection of over 5,000 haute-couture garments and 15,000 accessories, as well as thousands of sketches, collection boards, photographs, and objects.

The designer's most iconic garments include the Mondrian collection of dresses from his Autumn Winter 1965, based of the geometric paintings of the French artist of the same name, and the 1966 Le Smoking tuxedo suit for women.

French architecture practice Studio KO will lead the design of the 4,000-square-metre building in Marrakech.

"When Yves Saint Laurent discovered Marrakech in 1966, he was so moved by the place that he decided to buy a house and regularly go back there," said Pierre Bergé, Saint Laurent's long-term partner and president of the Fondation.

"It feels perfectly natural, 50 years later, to build a museum dedicated to his oeuvre, which was so inspired by this country."

The museum will comprise a permanent display of his work staged by Christophe Martin, a space for temporary exhibitions, an auditorium, a research library, and a cafe and restaurant. 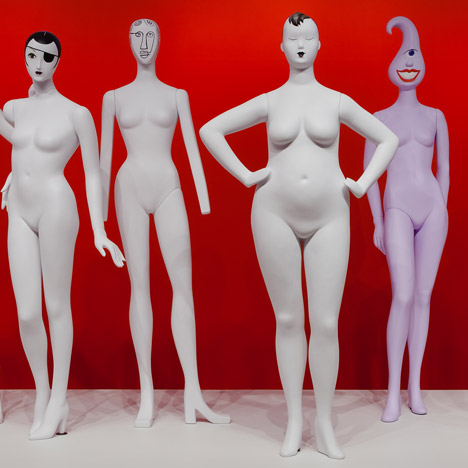 Ralph Pucci's fashion mannequins "mirror how we want to see ourselves"

The new building will be located on Rue Yves Saint Laurent near the Jardin Majorelle, a garden he and Bergé saved from development in 1980.

The site is now a popular tourist and features a museum dedicated to Berber culture, and is also where Saint Laurent's ashes were scattered following his death in 2008.

Scheduled to open at the same time as the Marrakech outpost, the museum in Paris will be situated in Saint Laurent's former couture house at 5 Avenue Marceau.

The designer worked at the address for almost 30 years, and since 2004 it has been home to the Fondation, which is responsible for conserving the work of Saint Laurent's 40-year career.

Stage designer Nathalie Crinière and interior designer Jacques Grange will rethink the building's existing exhibition space, creating an area double the size and refurbished in the style of the original couture house.

"By walking through the former haute couture salons and Yves Saint Laurent's studio, visitors will experience the essence of the creation process within the haute couture house," said a statement from the Fondation.

Saint Laurent was born in Algeria in 1936, and grew up by the Mediterranean before moving to Paris at 18 to pursue a career in fashion. At just 21, he took over from Christian Dior as head of the renowned fashion house, but was conscripted to serve in the French Army during the Algerian War of Independence in 1960.

On his return a year later, he set up his eponymous couture house and led it until his retirement in 2002. During Saint Laurent's later years and after death aged 71, the brand was led by a number of designers including Tom Ford and Stefano Pilati.

In 2012, French designer Hedi Slimane – who had previously worked for the company – took over as creative director. Slimane controversially changed the iconic monogram logo and dropped the "Yves" from the brand's name, and has since opened a series of minimal stores including flagships in London and Paris.

The two new museums will pay homage to Saint Laurent's work and legacy, and are due to open in autumn 2017.

"These two museums not only intend to attract fashion and art lovers, but also aim to appeal to a large audience interested in discovering Yves Saint Laurent's work, the oeuvre of a major artist of the 20th century," said the Fondation.

All images are courtesy of Fondation Pierre Bergé.