An exhibition at Shanghai's Power Station of Design museum showcased 130 pieces of work by British, Turkish-Cypriot fashion designer Hussein Chalayan that explore his career, themes of race, culture and migration.

Titled Hussein Chalayan: Archipelago, the exhibition was divided into a number of chapters, or fictional islands of an archipelago.

Over 130 pieces by Chalayan were exhibited, with each of the chapters-cum-fictional islands exploring the key themes that encompass Chalayan's designs, creations and collections.

Chalayan is best known for his designs that transcend both fashion and art. His collections often include futuristic garments including his Autumn Winter 2000 show, where garments doubled as home furnishings.

The exhibition starts with two works from Chalayan's first and second collections that were made after graduating in 1993 from London's Central Saint Martins university.

From here, garments, objects, images and films made between 1993 and 2020 were displayed across and within monochromatic platforms and alcoves of varying shapes and sizes.

"Through his designs, people can get a strong feeling for his thinking and criticism on the dichotomies of globalization and localism, the individual and the grand world theatre, and mechanistic views and the spiritual world," said the museum.

"Clothing as body cover is another kind of escape, a detachment of emotions, and a site of contradictions. Chalayan lets his clothes oscillate between the two-dimensional (tailoring, films) and three-dimensional (fashion shows) in an effort for them to overcome their wearers and become disembodied, nameless narrators."

Mechanical dresses from Chalayan's Autumn Winter 2007 show titled Airborne were exhibited within a black-painted display unit. Mannequins were draped in the illuminated and laser-cut garments and elegantly posed as though taking off for flight.

"He once stated that he wanted 'to create a sense of life for the clothes,' which is also what we hope and imagine for the islands of this exhibition," said the museum. 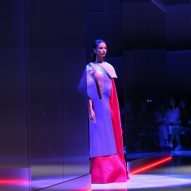 The ninth chapter of the exhibition displayed pieces from the Act to Form collection, which was shown during London Fashion Week's Autumn Winter 2017 schedule.

Mannequins were positioned ripping through the exhibition's paper walls wearing garments that were ripped open to reveal glitter- and confetti-filled linings and innards. The collection explored and revisited ideas surrounding Greek civilisation and identity.

Positive moulds of busts used to create garments, from Chalayan's Spring Summer 2006 collection titled Inertia, were suspended from the ceiling, while the negative moulds were built into the exhibition walls.

"Hussein Chalayan liberates garments from their restraints in terms of function, trends, and the fashion industry, allowing them to express themselves more freely and profusely," said the museum.

"Chalayan repeatedly discusses the topics of migration, travel, separation, and return, and they become more complex and unpredictable through the intervention of technology and cyberspace," said the museum.

In 2015, Chalayan designed elasticated costumes and sequinned garments for performers in his first self-directed dance production at Sadler's Wells theatre.

In 2018, he was awarded the London Design Medal not long after his Act to Form show at London's Sadler's Wells in 2017, which marked the designer's return to London Fashion Week after showing in Paris for over a decade.

Hussein Chalayan: Archipelago was on show at the Power Station of Art. See Dezeen Events Guide for an up-to-date list of architecture and design events taking place around the world.