Daniel Valle Architects created a triangular notch in the roof of this sandstone-clad residence in Madrid, helping to visually separate the part used by the clients and the part occupied by their children (+ slideshow).

Spanish architect Daniel Valle and his team wanted to create a layout that would allow the Hernandez family a degree of independence from each other as they age.

The question that defined the project was: "How do you organise a house and its different rooms if the relationships between family members are constantly shifting?"

The result is a 320-square-metre house called Hernandez Residence, set on a sloping plot in Madrid's suburbs.

Three volumes subtracted from the block give the building its distinctive form, which is intended to divide the house into two distinct zones.

"The relationship between parents and children is in flux for the coming years: from total dependency to independency," said the team.

"Accordingly, the house organises itself ambiguously between one family nucleus and two independent areas expressed to the exterior by a diagonal cut that divides the cubical mass into two sub-masses."

The first cut-out is a triangular notch in the roof that acts as a ventilation and lightwell, while two horizontal openings in the flank walls of the house form sheltered porches.

A large spiral staircase twists through the three floors below the notched roof, strengthening the vertical divide.

A combined sitting room, dining area and kitchen occupy the ground floor above an underground garage.

Upstairs, a guest bedroom and master suite are situated to one side of the staircase, while three children's bedrooms and a playroom are on the other.

"The location of the vertical circulation on the central part of the house makes the interior spatial division evident although it remains a clear single volume from the exterior," explained the architects.

"On one side of the vertical circulation the house is occupied by parents and on the other side by the three children."

A large window in the vertical edge of this notch channels the southern sun onto the staircase, and down to the ground-level living space. 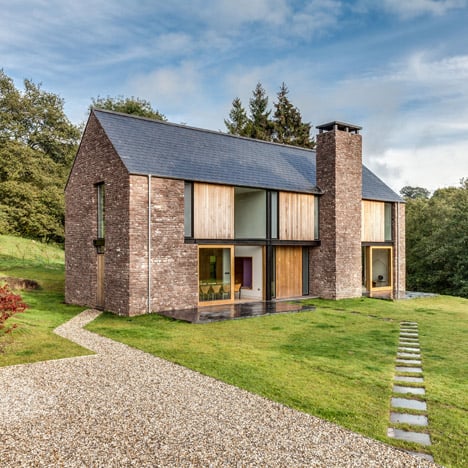 The whole structure is clad in panels of insulated light beige sandstone. The stone was harvested from a nearby quarry – a decision made to reduce the energy involved in transporting the material to the site, according to the architects.

"The material is very gentle to the touch and has a low thermal conductivity that is important during the hot summers in Madrid," they said.

The rough-textured concrete floor slabs are left exposed across the ceiling, contrasting the bright white walls.

Hardwood flooring with integrated heating is intended to give "a warm and natural feeling on naked feet during the winter months" and offset the concrete details.

Daniel Valle founded his Madrid office in 2003, before opening a Seoul outpost. The studio recently completed the headquarters for a South Korean publishing house, accessed via a large spiral staircase.