Scheduled to open in 2018, they form part of a series of 80 new stations planned for the network. The city plans to have all of the new stations in place by 2020, which will include laying 160 kilometres of new tracks.

The aim is for every new station to have its own identity. But for construction efficiency, each one is to be developed from the same standard model used by applicants in this competition. 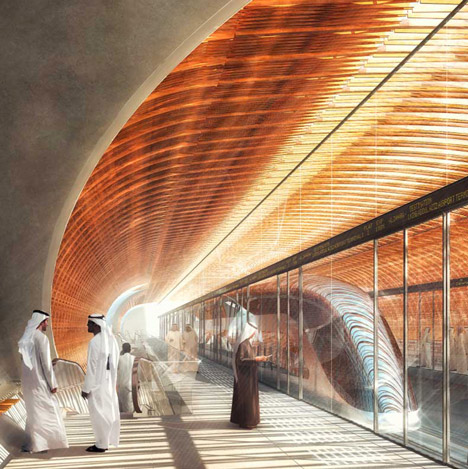 The proposal involves using bold injections of colour – particularly red – to highlight structural elements within the station. In renderings, these are visible alongside the escalators, on the platforms and to frame the entrances.

The studio suggests that other surfaces be left bare, revealing material finishes that include raw concrete.

"We were working on visual combination, and accentuation of pure form and space," said the design team in their description.

By contrast, BuroMoscow's proposal for Terekhovo station has a more minimal aesthetic, focusing on light and shadow.

The entrance pavilions are designed with fluted walls, while the ticket area is to feature mirrored panels and large circular lighting fixtures. Down on the platforms, illuminated silhouettes will decorate the columns.

According to the designers, the space will be "illuminated with reflected light".

Construction of the The Third Interchange Circuit, a new circle line, started in 2011 as part of a transport development programme backed by the city mayor. The aim is to ensure that 93 per cent of Moscow residents live within walking distance to a Metro station.

"The winning projects for Terekhovo and Nizhnie Mnevniki stations were chosen for their unique and original design and perfect vision delivery in accordance with the highest standards of contemporary architecture," said Marat Khusnullin, Moscow's deputy mayor for urban development and construction.

Other cities planning new metro stations include Jeddah, Saudi Arabia, which has appointed Foster + Partners to the job, and Paris, which is set to have one of its stations designed by Japanese architect Kengo Kuma.