Protruding bricks create a crown on top of this cylindrical chapel by DANS Architects, which forms the centrepiece of a new church complex in the Slovenian city of Maribor (+ slideshow).

Ljubljana-based DANS Architects designed the Don Bosco Church around the curved brick chapel. A colonnade with slender columns links the cylindrical structure with the rest of the Roman Catholic Salesian complex.

This canopy also frames a curving courtyard, keeping it protected from two nearby roads. But the nave and bell tower extend above the roofline to signal the building's location.

"At a glance one can feel the extent of the nave from the ground over the roof of the lower part of the complex all the way to the cornice that represents a crown," said the architects.

The Don Bosco Church complex is located in a residential area of the city, positioned at the foot of the Pohorje Massif mountain range. This area boasts views of the Pekrska Gorca – a hill topped by a tiny whitewashed church. 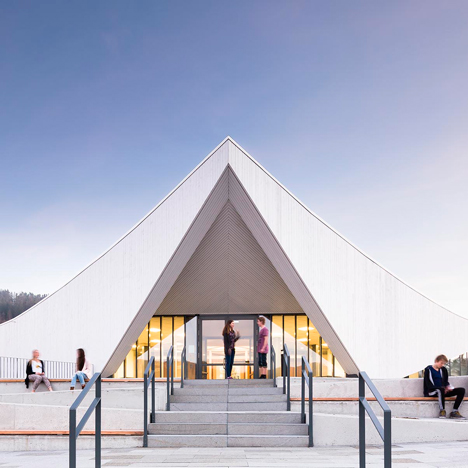 The chapel's form is derived from a triangle, but it has rounded sides and corners that give it a pebble-shaped plan.

Glossy white bricks embellish the curving brown brick facade and depict seven crosses, while triangular blocks set at intervals along the edge of the flat roof are intended to be reminiscent of a crown.

Inside, wooden pews can seat a congregation of 300 below an oculus and 100 handmade clay lamps, which are strung from the ceiling.

"The nave is the place for introverted contemplation, therefore the only view out is towards the sky," said the architects. "The most sacred place is thus marked by an intense experience of light."

"We choreographed a play of light: vivid natural light emitting from the round skylight interferes with diffused light of the nave," they added.

Exposed concrete walls offer a blank canvas for a series of religious icons, which are mounted on pale wooden panels.

"These openings induce a feeling of peaceful rotation around the central oculus," said the team. "The pristine non-decorated expression of the structure of the nave is accentuated by the plasticity of softly shaped concrete."

The golden tabernacle is a triptych with outer wings that veil the central cabinet. The inner face of one door is adorned with an icon taken from the Basilica of Our Lady Help of Christians in Turin, which was built by 19th-century priest John Bosco.