A faceted red surface creates geometric patterns across the exterior of this house in southern Italy that architect Giacomo Garziano has renovated for his parents (+ slideshow).

The building has been Garziano's parents' home for 40 years. It also accommodates the Italian office of art collective Elephants and Volcanoes.

The main house was built in the 1950s by the architect's grandfather, and was extended in the 1970s.

The brief given to Garziano's Amsterdam-based studio GG-loop was to create a new facade that unifies the two disparate parts, but also improves the building's energy efficiency.

Garziano's strategy was to create a three-dimensional outer surface that exploits the contrast between light and shadow. 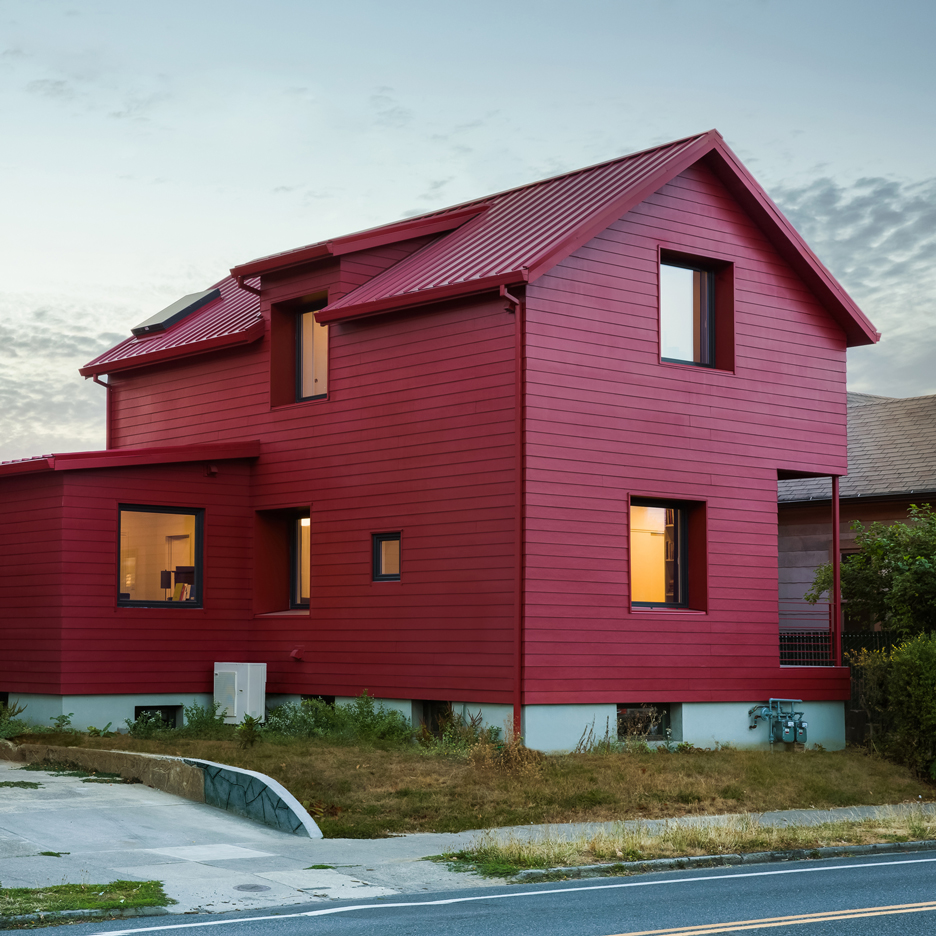 He deliberately chose red to make it stand out from the sky and the surrounding townscape – a technique also employed recently for a French cultural centre and an American house.

"Red has the longest wave length of the visible spectrum and can be associated with the longest sound waves that, rather than touching our ears, are felt in the torso," he explained.

"It touches the instincts of the viewer," he continued. "It is not linear, it is a multi-faceted perception that reaches out from the walls, transforming the residential building into a sculpture."

An exterior insulation and finishing system (EIFS) – a type of external cladding including both solid panels and a render topcoat – was used to create the faceted surface, largely made up of tessellating diamond shapes.

The outer coating comprises a mix of plaster, paint and resin, which gives the building its glittery red finish.

"The glittery effect is given by the final resin coating, in which glittering particles were mixed with the two resin components," said Garziano.

Named Gentle Genius, the house is located on a corner plot in the town of Altamura.

Inside, the original residence has been left almost entirely as it was, along with the office space used by the art collective. But a small area has been renovated to provide a guest apartment for a resident artist.

Like the facade, this space is dominated by geometric patterns. The walls feature a honeycomb-like pattern, known as a Voronoi tessellation, that integrates storage areas and furniture elements.

Garziano named this part of the project The Infection, because its patterns are reminiscent of bacteria.

"Everything is integrated in the Voronoi organic structure," he explained. "The digitally fabricated wooden cells contain kitchen, LED lighting system, closets, bookshelves, audio system, pantry and so on."