Stockholm 2016: Japanese designer Jin Kuramoto's collection of screens for Swedish furniture brand Offecct can be arranged as "a forest of organic shapes" to help dampen noise in open-plan interiors (+ slideshow).

The Wind dividers each rest on a concrete base and are made of fabric stretched over metal tubing. They are available in five different shapes modelled on forms found in nature.

"I wanted to take the randomness of nature's beauty, which we can see everywhere outside, into the indoors," said Kuramoto, who also recently contributed a set of containers to Claesson Koivisto Rune's Smaller Objects brand.

The dividers range in height, and include diamond shapes with gently rounded edges, as well as longer, more rectangular forms.

They have been designed to be arranged in a mixed configuration "like a cluster of plants or a small forest", to help people feel more comfortable in areas such as hospital waiting rooms or large offices.

"These room dividers are a concept more than individual products," said the designer, who has also previously created furniture based on shipbuilding techniques. 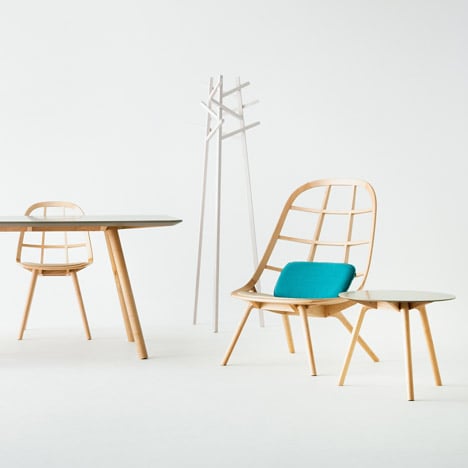 "They can be seen as a celebration of the beauty of nature – a forest of organic shapes that also control acoustics like a kind of tuner, that makes the environment more pleasant than friendly," he added.

The screens can also help people hold private conversations, even in "acoustically chaotic" places, according to Kuramoto.

Offecct previously collaborated with Italian designer Luca Nichetto on a similarly unconventional collection of ceiling-hung screens, influenced by washing hung above the narrow alleyways of Venice.

The Wind dividers are on show at Stockholm Furniture Fair, which is taking place from 9 to 13 February 2016. Also being presented at the event are Inga Sempé's lighting collection for Wastberg, Konstantin Grcic's debut range of tiles for Mutina, and Färg & Blanche's leather-framed mirrors with criss-crossed indentations.