Stockholm 2016: acoustics are the hot topic at this week's Stockholm Furniture Fair, with designers and brands launching products aimed at making interiors quieter.

The fair features more acoustic products than ever, with the usual sound-absorbing wall panels being joined by upholstered desktop screens for computer working, spongy wall-mounted booths for phone calls and even dome-shaped baffles designed to hang just above workers' heads.

The trend was noted by journalists on the jury of the editors' choice awards at the fair.

"Noise reduction seems to be a major preoccupation in Scandinavian interiors these days, which is hardly surprising since the wooden floors and raw surfaces that are synonymous with Scandinavian design don't absorb sound very well," said Dezeen editor-in-chief Marcus Fairs, who was one of the jurors.

Fellow jurors Walter Bettens of Damn magazine and Adeline Seidel of Stylepark added that designers have neglected noise in interiors for too long. 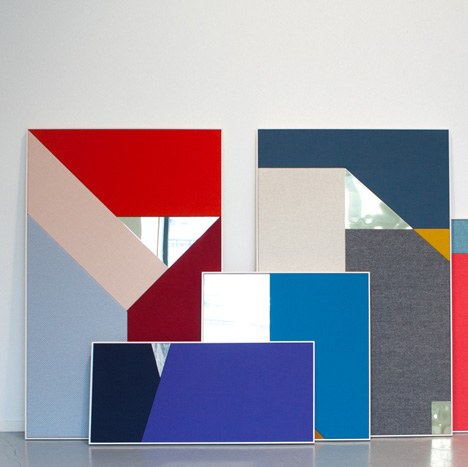 "Interior designers are not solving the problems of acoustics," said Bettens, editor of Damn magazine. "They're far too busy with textures and colours but it's a very important thing. It should be part of the education of a designer."

He added: "I went recently to a new 'designer' restaurant in Milan and I couldn't hear what people were saying because of the terrible acoustics."

"Designers think about light and form and surface but they often don't think about sound," said Seidel, chief editor of Stylepark. "They only think about whether it looks nice."

Carl Jemtelius of Swedish acoustic products brand Zilenzio said demand for his products was growing fast as companies tried to cut costs by cramming staff in spartan, open-plan offices. The side effect of this is that workers' productivity is increasingly affected by noise distractions.

"There's a lot of demand in Scandinavia and we're starting to look at other markets," he said.

In addition, Jemtelius said the trend for more flexible office space where workers are encouraged to use a variety of different working environments during the day means there is increasing demand for quiet zones.

"That calls for different office environments. Still they need to be nice to work in. That's why acoustics are on the up."

"Today we're sitting in open spaces and need some privacy when we're talking on the phone," added Pia Davidsson, marketing manager at Swedish brand Form2, which launched a wall-mounted booth at the fair that allows workers to make uninterrupted phone calls.

"To be able to go in there and have your private conversation is so important," she said. "The base is a mineral wood pressed together, and that absorbs sound very nicely. The top is a compressed fibre wool and the same for the little shelf. If you stand inside and talk, you hear that the sound stays inside, and if you stand outside you can barely hear what's going on inside."

Nordic designers have been pioneering acoustic design for a number of years. Copenhagen duo GamFratesi's 2009 Rewrite desk, put into production by Ligne Roset two year's later, was one of the first to provide a sound-absorbing cover over a personal workspace.

For group working, Stockholm-based Form Us With Love designed Hood, a curved felt dome that suspends from the ceiling over large tables in 2013.

A year later the studio also launched a company called Baux, dedicated to producing colourful and patterned insulating panels made from wood wool – a combination of wood chips, cement and water.

Baux was conceived to bring some design flair to the often dull world of acoustic products.

"Design hasn't been an important factor [in the acoustics industry], but what we're seeing now is that buyers such as architects or interior designers are actually asking for design values in materials that are normally purely functional," Baux co-founder Petrus Palmér told Dezeen when the brand launched. "Currently no one is really meeting those demands."

Baux extended its offering of panels at the Stockholm fair this year with a range based on the different colours that the wood chips turn when heated during production.

Also at the furniture fair, Swedish brand Offecct debuted a set of freestanding upholstered panels by Japanese designer Jin Kuramoto, adding to the set of ceiling-mounted padded dividers that Luca Nichetto designed for the brand in 2014.

Other more whimsical solutions on show at the fair include the Tomako from Finnish brand Vivero – a polyester felt dome that sits at the end of a curved metal pole like a lampshade so it can hover over the user's head.

"Tomoko helps you to create an immediate territory of your own by eliminating elements that interfere with your concentration, such as noise or visual distractions," said the brand. "At the same time, it signals to others that you are not to be disturbed."