These homes designed by Studio Macola sit within the shell of an old factory in Venice, which still features a trio of tall industrial chimneys (+ slideshow).

The Venetian studio created the 3,950-square-metre housing complex as part of a wider plan to revitalise a former industrial site on Murano – an island to the north of Venice that is famed for its decorative glass production. 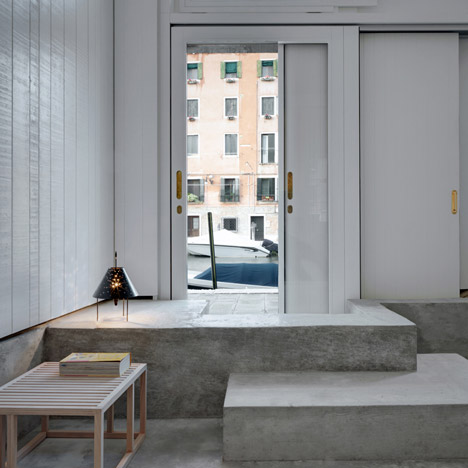 The first, Block A, is the only one completed so far and contains 36 apartments. It sits behind the factory's long north-facing facade and its interior lines up with the building's original window openings.

When complete, Block B will provide a further 18 apartments, inserted beneath the arched roof of the main factory block.

This part of the project will also include a covered square, which the studio hopes will become the heart of the residential scheme.

While the factory's brick wall creates a continuos face for Block A, the rear facade is fragmented into a series of smaller blocks that give it a serrated plan.

By spacing the terracotta-coloured blocks, the aim was to maximise the natural light available on the restricted site.

"The juxtaposition of two duplex units and three simplex units brings about a comb-shaped structure which provides ample sunlight from the south, thereby granting the bathrooms both natural light and ventilation," explained the architect.

Because of it historic cityscape, Venice is not a city where many new buildings are constructed, but among the few recent examples are a long narrow courthouse and a biennale pavilion in the Giardini gardens.

The city will this year host the architecture biennale. This year's event will be overseen by Pritkzer Prize-winning architect Alejandro Aravena, who rose to fame for his social and emergency housing design.

Photography is by Marco Zanta.