A rainbow-coloured facade shaped like a row of houses fronts this school dining hall in southeast England, designed by UK studios De Rosee Sa and PMR to reference the stories of Roald Dahl (+ slideshow).

Named Little Hall, the extension to Prestwood Infant School in Buckinghamshire contains a kitchen and servery providing hot school meals for up to 96 children at a time.

London-based De Rosee Sa teamed up with local studio PMR to come up with their playful solution. The aim was to recreate one of the stories of the late author Roald Dahl, who lived locally and is said to have based the character of Miss Trunchbull from his book Matilda on a past headteacher at the school.

"We wanted to create a building that the children would find visually stimulating and enjoy engaging with on a daily basis," architect Max de Rosee told Dezeen.

To achieve this the team looked to Dahl's Fantastic Mr Fox, whose main character states that "every day we will eat like kings".

In the book, the fox describes "a little underground village, with streets and houses on each side – separate houses for badgers and moles and rabbits and weasels and foxes".

The architects recreated this village using painted cedar battens. On the two sides of the structure that face onto the children's playground, thin battens of different lengths draw the irregular roofline of houses onto the white polycarbonate facade behind. 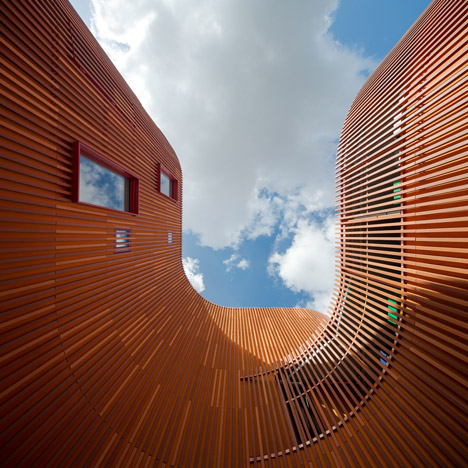 COBE's Copenhagen kindergarten designed as a "village for children"

The cladding is broken up into colourful segments, painted in all the colours of the rainbow.

"The roofline takes its shape from the existing school's classrooms and main hall to integrate the building with the existing site context," said De Rosee. "The changing colours were chosen to bring a sense of vibrancy into the school playground for the children to enjoy."

Windows are positioned at different heights, to reference the houses of the different animals, while additional openings in the facade provide external and internal seats.

The school is now bringing these animal references into its class structure, connecting each year group to a different animal house.

"The different heights of fenestration along the front facade allow the different age groups to interact with the building, with reading areas formed in the joinery internally and perching spots externally," added the architect.

The hall, which is a result of the government's Hot Dinners initiative, also has refreshment facilities for after-school clubs and can be rented out to the local community for a variety of events.

Inside, a large bookcase running the full length of the front of the building provides window seats for reading. Six skylights in the roof bring light over the eating area.

Other facilities include a one-to-one teaching space and two toilets painted to depict a fox's den, a bush with berries and Mr Fox's tail.

Walls and ceilings are lined in plywood, while the structural concrete slab has a polished finish, creating a hardwearing floor for children's activities.

De Rosee Sa was established in 2007 by De Rosee and co-director Claire Sa. The studio's other projects include a "magical lakeside cabin" in Belgium that shares many characteristics with the witch's houses found in fairytales.

PMR was set up by three architects including the late James Phillips, one of the driving forces behind the project who passed away unexpectedly in September 2014 after collapsing during a half marathon. A foundation has since been set up in his honour, and raised the funds necessary to create the colourful cladding for this project.