Described by architecture studio De Rosee Sa as a "magical lakeside cabin", this small black hut in Belgium shares many characteristics with the witch's houses found in fairytales (+ movie).

London-based De Rosee Sa designed the 35-square-metre Woodland Cabin to function as a picnic venue, guesthouse or art studio, but didn't want the structure to look too new.

This led to a design for a rustic wooden structure, which features an all-black exterior, a steeply pitched roof and a smoking chimney. The building is even pictured with a broomstick propped up against the wall. 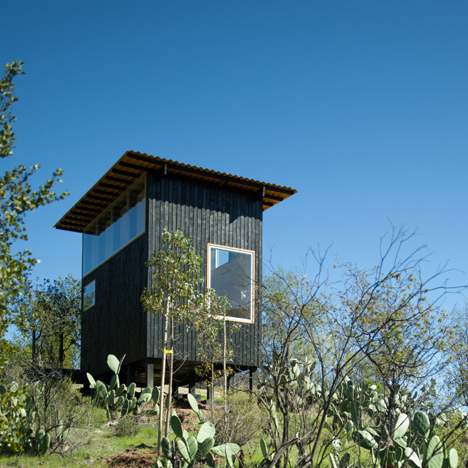 Charred Cabin by DRAA is a blackened timber shelter on stilts

"It was important that it felt as if it could have been there for years, that it had a dialogue with the local vernacular of agricultural buildings, but that it also contained some flashes of simple detailing."

The cabin was commissioned by De Rosee's father, who lives in the village of Nouvelles in southern Belgium. It stands within the grounds of his house, between a lake and a wood.

The De Rosee Sa team constructed the cabin themselves. Both the structure and external cladding are wood, built using trees felled and milled from the surrounding woodland.

"Initially we wanted to use vernacular techniques, but discovered these were based on tar and creosote, and are no longer sold," said De Rosee.

"The product we chose instead was incredibly cheap," he continued.

"Farmers are looking to get rid of used tractor engine oil so it was given to us, and this finish is quite prevalent on local agricultural timber buildings."

Concrete strip foundations ground the building to its site.

Inside, wooden ceiling beams are left exposed overheard, while walls are lined with oriented strand board (OSB) – a type of engineered panel made up of wooden strands.

"We chose OSB for the interior surfaces because we needed a robust surface," said the architect. "And we wanted the same material for the floor, walls and ceiling to create an atmosphere that is not domestic and yet not a vernacular material."

Apart from a wood-burning stove that provides the building's heating, there are no fixed furnishings in the main space. This allows it to accommodate different activities, from working to sleeping or socialising.

A toilet and washroom are located at one end, while a small reception area can be found at the other. All three rooms open out to a wooden deck, from which residents can look out over the lake.

Photographs and movie are by Will Scott.