Dezeen promotion: Italian designer Luca Nichetto has created a collection of furniture for Portuguese brand De La Espada, which will launch at Shanghai's Festival of Design from 6 to 19 March 2016.

The Stella chair is one of the five pieces by the Stockholm-based designer to be revealed at the event, which is set to take place at Chinese studio Neri&Hu's Design Republic Commune store and gallery.

Nichetto's furniture collection will be placed across the store in rooms designed to enhance his creations, showcasing his studio's research into colour. The Stella chair features a hardwood frame and is available in various finishes.

A moulded fibreglass seat slots into the structure, and can be ordered in gloss or matte, and black or white. To juxtapose the 1950s-style material, the inside of the seat can be lined with different fabrics.

The four other pieces launching at the event include the Marlon Rectangular Table, which has a solid hardwood frame combined with marble legs and top. The Steve Pouf, Nino Ottoman and the solid wood Kim nest-ing tables will also be presented in Shanghai. 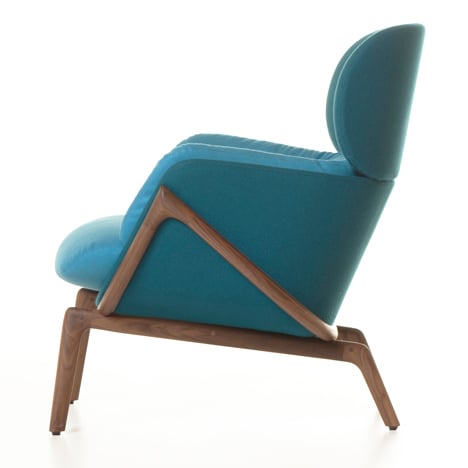 The inaugural Festival of Design is titled Commune as a reference to its focus on collaborative projects and communal engagement.

Its setting is a former colonial police station in Shanghai's Jingan district, which was transformed by Neri&Hu in 2012.

"The concept for the Design Commune is to bring designers from around the city to hopefully have a place where they can have a discourse in architecture, in product design, in interior design," Lyndon Neri told Dezeen in 2012.

De La Espada is a Portugal-based manufacturer that focuses on woodworking craft and providing quality production resources for selected designers.

Its products include a Neri&Hu-designed furniture collection with pieces modelled on simple Shaker designs.

Nichetto has previously collaborated with De La Espada for his 50/50 collection, designing the Laurel Coffee and Side Table with a cylindrical base and an inverted cone that appears to perch precariously on top.

During the festival, which takes 6 to 19 March 2016, Luca Nichetto will also take part in the seminar programme, describing his design processes and the research behind the studio's work.

Read on for more information from De La Espada:

Five new products will launch at the event including Stella armchair, in a stunning combination of fibreglass, solid hardwood and upholstery; and Marlon Rectangular Table, with a solid hardwood frame combined with marble legs and top. Also launching are Steve Pouf, Nino Ottoman, and the solid wood Kim nesting tables.

All are designed by Luca Nichetto and manufactured in Portugal by De La Espada craftspeople. The new products will be presented in specially designed room settings that highlight the carefully researched colour system that forms part of the furniture collection.

Festival of Design: Commune takes place in multiple locations inside and outside Design Republic's Flagship store, a heritage-listed former Gordon Road Police Station within a commercially and culturally diverse Jiang'an District in metropolitan Shanghai. The inaugural edition Commune places an emphasis on collaborative projects and communal engagement with an interest in initiatives inspired by the notion of community and exchange, thus reinforcing Design Re-public as an experimental and innovative platform.

As well as presenting the expanded Nichetto collection for De La Espada, Luca Nichetto will also take part in the festival's seminar programme, talking about his design processes and the research behind the studio's work.

The Stella family grew out of Luca Nichetto's desire to combine fibreglass – a material popular with 1950s design – with contemporary premium materials. The Stella Armchair boasts elegantly curving armrests, and its wooden legs support a visible fibreglass shell that encloses an upholstered seat and backrest.

The Stella Armchair has been designed for extreme versatility, suitable for residential, workplace and social settings. With one leg in the past and another in the future, the Stella Chair continues the play with classic forms that is characteristic of the Nichetto collection for De La Espada.