Residents were invited to plan the layouts of these new homes in Manchester, England, as part of a pioneering housing project by property developer Urban Splash and architecture office ShedKM (+ slideshow).

Conceived as an alternative to the so-called noddy boxes offered by many volume housebuilders, the House project aims to combine the cost benefits of modular construction with the flexibility offered by architect-designed properties.

Each house looks the same from the outside, but the internal layouts range greatly.

Residents can choose between open-plan or more traditional room-based layouts, specify the number of bedrooms, and select whether living rooms are upstairs or downstairs.

"House is born from our desire to create something for customers who want to live in well-designed homes and stay in the city centre," said Urban Splash chairman Tom Bloxham.

The company, which is behind projects including the remodelling of Sheffield's Brutalist Park Hill complex, believes House offers a model approach to residential development in cities.

"We noticed that within UK cities there is a real lack of diversity in terms of new residential stock, and our traditional customers would ultimately get older, richer and end up moving to Victorian and Georgian terraces in the suburbs," explained Bloxham.

"House is our way of offering them something in the city."

The first 26 completed houses have been installed alongside the canal in New Islington, and the final 17 are about to be delivered. Each one was prefabricated in a factory as a series of timber-framed shells with fixed positions for kitchens and bathrooms. 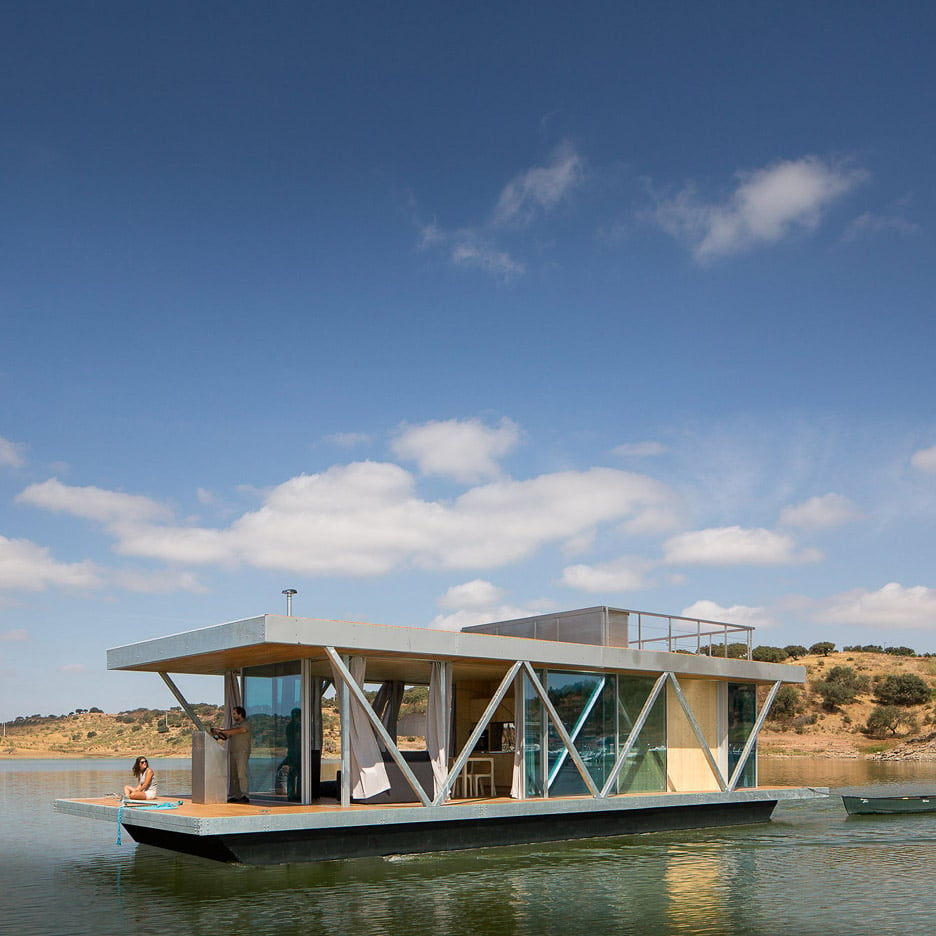 Prefabricated floating house can be transported to lakes and waterways worldwide

Once the modules have been transported to site, they are craned into position. Partition walls are added later, in accordance with the layouts selected by each of the 43 buyers.

"This concept has been a long time in the making and we believe that it is a game-changer to tackle the current housing shortage this country is facing," added ShedKM director Ian Killick.

"They also happen to be homes that people are proud to live in," he said.

ShedKM, which has offices in London and Liverpool, previously teamed up with Urban Splash on another housing project – the Chimney Pot Park, which revitalised streets of unwanted century-old terraced housing.

One of the most successful elements of that scheme was its combination of an "upside-down" layout – living rooms are above bedrooms – with a traditional pitched roof exterior. ShedKM incorporated this template into the House project.

They range from two to three storeys in height, allowing for between one and five bedrooms, and each offer a balcony. Other features include highs ceilings, car parking and private gardens.

The growing demand for affordable housing in the UK has prompted many architects and industry figures to look at new approaches to residential design. For instance, Mae Architects has suggested that troubled housing estates can be renovated.

Meanwhile, Bell Phillips Architects has developed a new model for homes for elderly and disabled residents, and Baca Architects has designed a floating house concept that could be deployed across London's waterways.

With the first phase of New Islington housing complete, the ShedKM and Urban Splash team is preparing a planning application for a second phase on an adjacent site. A House development is also planned for Irwell in Salford, on the outskirts of the city.

Photography is by Jack Hobhouse unless stated otherwise.