Studio Alexander Fehre used different wall and ceiling finishes to define the spaces of this 45-square-metre flat in central London.

To make the home feel more spacious, the studio moved the dining table into the kitchen, leaving enough space in the living room for a lounge and study area.

"With Filippo's flat, we began by analysing the exact functions and requirements that the space should fulfil with the objective of exploiting every last square centimetre to the full," said Fehre.

"We determined that redistributing the flat's layout would make a big difference, merging the living room, kitchen and small hallway to create one space."

A table and benches form the dining space, raised up on a platform at the far end of the kitchen under a window. The area is made distinct from the rest of the room by the choice of monochrome wallpaper, which features bands of semi-circles. 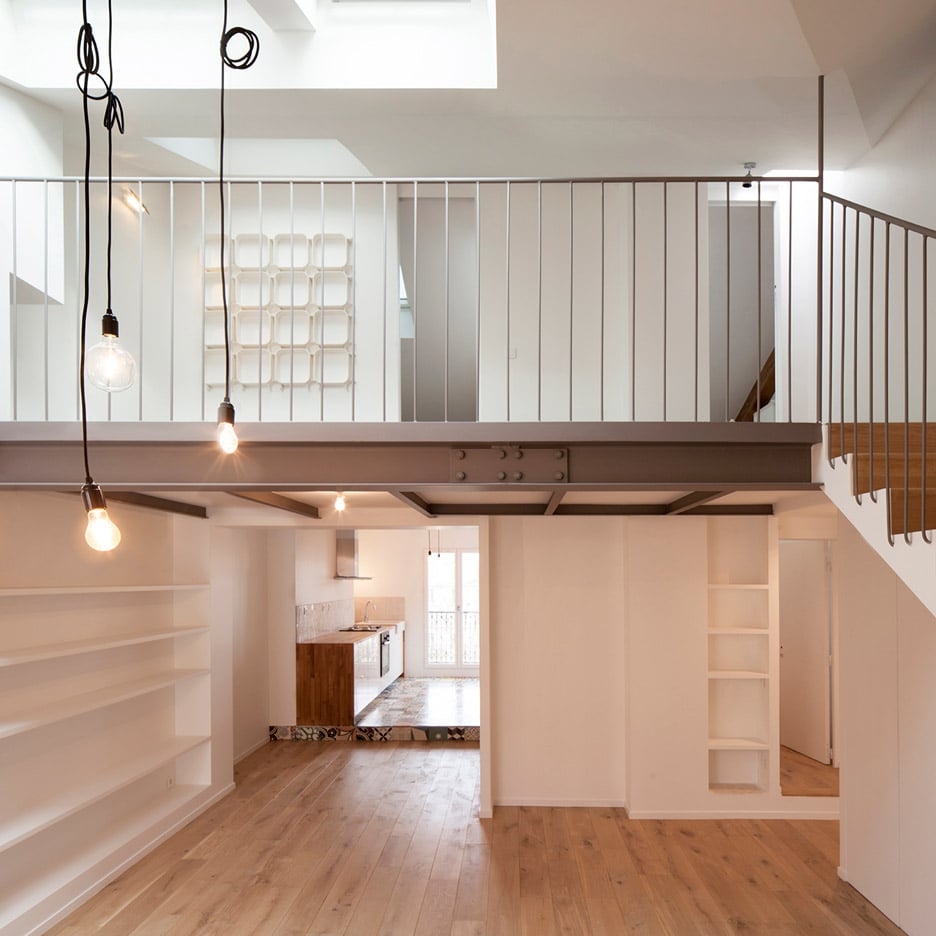 To contrast, the seating module is finished in a bright shade of crimson, described by the team as Valentino red.

White kitchen units run along one side of the room, opposite a shelving system made of veneered plywood, which also extends into the living room to form a backdrop for a television.

A sliding door slots into the volume of the shelving unit, to allow the two rooms to open up to each other.

Black herringbone flooring runs through from the kitchen into the living area, which is furnished with an L-shaped red sofa and a stepped coffee table.

"A black parquet floor brings a sense of clarity and cohesion to this spatial layout, while the shiny black, varnished finish creates additional depth," Fehre said.

A large copper-coloured metal lighting feature hangs down in the centre of the room, and is fixed to a circular ceiling mirror. Walls are white, and the ceiling is painted in a subtly darker shade.

"As with the dining area, the use of a different wall and ceiling colour in the entrance area gives it a slightly different definition," explained the designer.

A double-level wooden platform that spans the width of the narrow bedroom space. A mattress sits on top of the platform, making the bed the focus of the room, and the walls are painted purple.

The bathroom is decorated with wallpaper showing a pattern of palm fronds, described by the studio as the "determining" element of the room. Black tiling lines the shower – a reference to the parquet flooring the living room and kitchen.

"It all goes to show that 45 square metres in London can definitely be enough of a good thing," added Fehre.

Alexander Fehre established his studio in 2010. He has previously designed an office for a conveyor-belt company in Germany using aluminium-mesh partitions.