The designer – who is well known for her technology-focused fashion – wanted to showcase her "state of dreaming" through the collection and presentation, which took place on Tuesday during Paris Fashion Week.

"When I design, the draping process most of the time happens to me unconsciously," said van Herpen. "I see lucid dreams as a microscope with which I can look into my unconsciousness."

"In this collection, I have tried to bring my state of reality and my state of dreaming together," she added

Garments were separated into two main looks: Lucid and Phantom dresses. Both included voluminous circular silhouettes were presented in a colour palette of iridescent nudes, greens and grey. 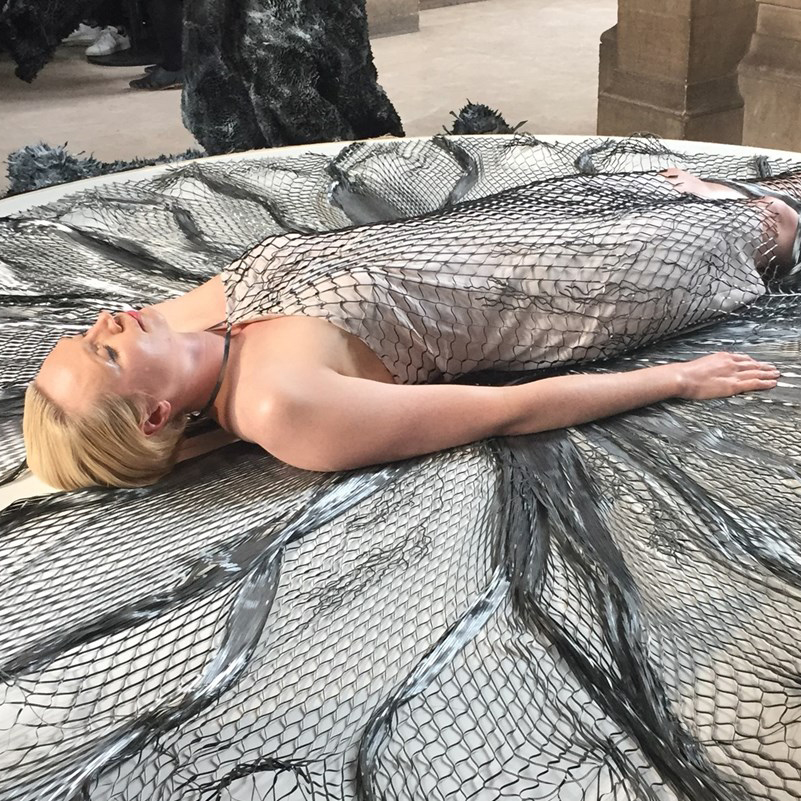 The Lucid looks were a continuation of the designer's collaboration with artist and architect Philip Beesley. The pair previously worked together to create 3D-printed dresses for van Herpen's Spring Summer 2015 show.

These garments – designed to appear as a "glistering bubble-like exoskeleton" – were made from transparent hexagonal laser-cut elements, that are connected with translucent flexible tubes.

The Phantom outfits were made with a light-weight tulle fabric, to which iridescent stripes were fused.

The collection also features  two 3D-printed dresses named Magma. Each of these pieces were are made by combining flexible thermoplastic polyurethane (TPU) printing with polyamide printing to form a "fine web". One of the dresses is stitched from 5,000 3D-printed elements.

Laser-cut leather shoes were created in collaboration with UK brand Finsk. Similarly to the footwear in van Herpen's Spring Summer 2016 collection, they featured a thin platform to create the illusion of the wearer being suspended above ground.

The idea of being in a dream-like state was extended to the audience through the design of the show space.

"Both the models and the audience are mirrored as one in the show space, creating a closeup and intimate experience," said the designer.

Each of the 17 models stood behind large optical light screens – more commonly used in television technology – which acted as both mirror and window.

As well as creating rainbow-coloured effects, the screens reflected a doubled image that shifted depending on the model's position and the audience's viewing angle.

Herpen's previous collections have included a variety of 3D-printed garments, as well as models suspended in vacuums between plastic sheeting. Last season, she used robots to print and weave a dress over an actress from Game of Thrones.

This season's Paris Fashion Week took place from 1 to 9 March 2016. At an earlier show in Milan, Jeremy Scott presented a dress made of a two-tiered crystal chandelier, while Sibling showcased 1980s-influenced "daytime disco" outfits in London.