New York studio SHoP Architects and Dutch landscape firm West 8 have designed a new city quarter for Philadelphia that would extend the skyline beyond its traditional boundary, the Schuylkill River (+ slideshow).

Working in coordination with the City of Philadelphia, Drexel University, and Brandywine Realty Trust, SHoP and West 8 have drawn up a 14-acre (six hectares) masterplan for a site near Philadelphia's 30th Street station – the third busiest train depot in the US.

The masterplan is geared toward start-up companies that draw on or work in partnership with the resources of the university, which is also located near the site. 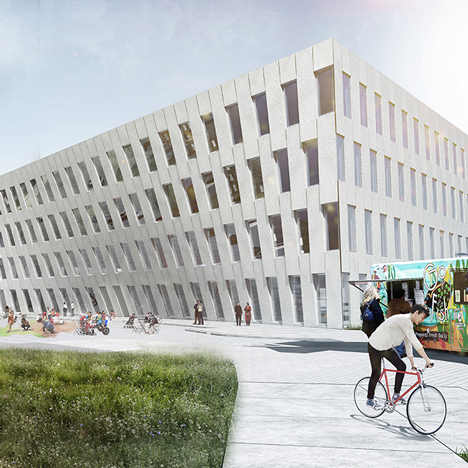 New streets and sidewalks will be created, as well as a new park, all intended to set high standards for public spaces. Meanwhile, new buildings will be designed to be as flexible in use as possible.

"The plan envisions a new gateway to University City – one that is dynamic, diverse, open and inviting," said the design team.

"In order to achieve a unified and enduring district identity through each successive phase of the project, the design of the district's streets and public spaces have been highly defined while the design of the individual buildings allow for variation and diversity as parcels get developed over time," they added.

The park, called Drexel Square, will be located immediately adjacent to the train station and is intended to host a variety of public events. These will be facilitated by a series of towers, the tallest of which could rise to 950 feet (290 metres).

New streets and mid-rise buildings will give the area a dense, urban feel in keeping with Philadelphia's fine-grained character, according to the designers.

Drexel University is a rapidly expanding research school with 26,000 students. The institution has been instrumental in developing the underutilized area around the station into an area now known as University City.  The University of Philadelphia and several hospitals and other institutions are also nearby.

Across the river, downtown Philadelphia is known as Center City. Once in decline, Center City is now flourishing, with dozens of new developments planned, something the designers hope to extend across the river into Schuylkill Yards.

Other notable projects in Philadelphia include a new library at Temple University designed by Snøhetta and an office building in the Navy Yard area by BIG.

More from SHoP Architects and West 8