Architect Zaha Hadid has designed a collection of silver jewellery for Danish design house Georg Jensen, including a twisted cuff and a ring that fits over two fingers (+ slideshow).

Designed to reference the sculptural forms and curves of Hadid's most famous buildings, the eight-piece collection will debut at the Baselworld watch and jewellery show in Switzerland this week.

"Working with Georg Jensen presented an opportunity to express our ideas in different scales and through different media," said Hadid.

"There is an inherent integrity within the organic structural logic found in nature and we often look at the coherence of natural systems when we work to create environments," she added.

"Our challenge was to translate that into something that can be worn; to reinterpret the rich history and tradition of Georg Jensen’s design approach into something new."

Each piece is created from sterling silver, and some also feature black rhodium and black diamond details.

The Lamellae Twisted Cuff – described by the architect as the collection's defining piece – will retail at £1,975. 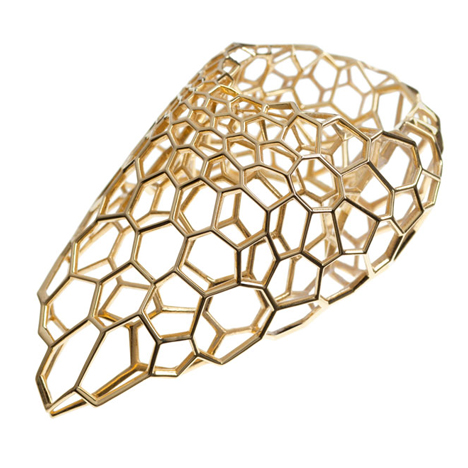 It incorporates a sweeping S line that makes it look as though it has been twisted in the middle.

A double-finger ring bears a resemblance to Hadid's pebble-shaped Wangjing Soho towers in Beijing, which was completed in 2015.

In addition to her jewellery collection, Hadid has also designed a site-specific architectural installation for Georg Jensen for the Baselworld show taking place from 17 to 2 March.

The installation, which was conceived as an extension of the jewellery collection, will serve as a lounge area for visitors.

Hadid has worked on a number of jewellery designs, including latticed gold filagree rings for Caspita and a series of sinuous pieces for Swarovski, but is best known for her landmark architectural projects such as the Heydar Aliyev Center in Baku and Dongdaemun Design Plaza in Seoul.