Kram/Weisshaar's mobile speaker is based on sound systems used in Colombia, which amplify the bass in songs during street parties.

The duo has replaced the usual fabric covering with a reflective surface, made from thin foil mounted on an aluminium frame.

As the music plays the sound vibrations distort the covering, which shivers and creates "stroboscopic and blurring effects", warping visitors' reflections. 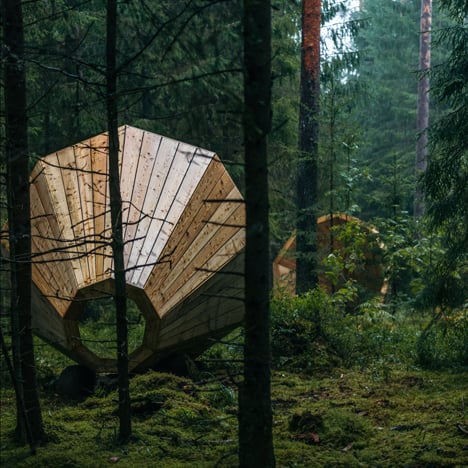 "As the music plays, colossal beats and vibrating images combine to create an intoxicating interactive experience," said the duo, who recently designed a robotic arm that could be remotely controlled to carve sculptures.

The installation was created for Plusdesign Gallery in Milan, as part of its Picós Project exhibition of Colombian sound systems.

The word Picó refers to the giant sound machines that usually accompany street parties in Colombia, and dates back to the early 1960s. These sound systems are often decorated in phosphorescent colours and glitter by local artists.

The exhibition opened on 13 February 2016 to coincide with the Festivale Musicale Sonido Classics – a 12-hour-long event that celebrates street culture.

On the smaller end of the speaker scale, Michael Young designed a portable Brionvega speaker that could be packed into a miniature satchel, and Ross Lovegrove downsized his giant Muon speakers to create a range of smaller wireless versions for British audio brand KEF.