Flooring made from concrete, wood and two types of tile helps to define the various rooms inside this Paris apartment, which has been renovated by local architecture studio Septembre (+ slideshow).

Septembre refurbished the 60-square-metre apartment in the city's 11th arrondissement for a couple with no children.

Named Hubert, the apartment previously had an interior that was partitioned in such a way that its spatial qualities were compromised. So the architects set about removing unnecessary walls and beams to create a sequence of connected rooms.

The rooms are linked by a corridor extending the full length of the apartment. Sliding doors can be retracted to accentuate the flow of space and light between the different areas.

"The main idea was to have a visual continuity along the circulation and thus to have all rooms aligned," Lina Lagerström from Septembre told Dezeen. "When the sliding doors are open, the depth of field gives the feeling of space and lightness."

A glass door separating the bedroom and bathroom at the end of the property ensures light from the bathroom window reaches the nearby rooms, while a mirror covering the bathroom's end wall creates the illusion of infinite depth. 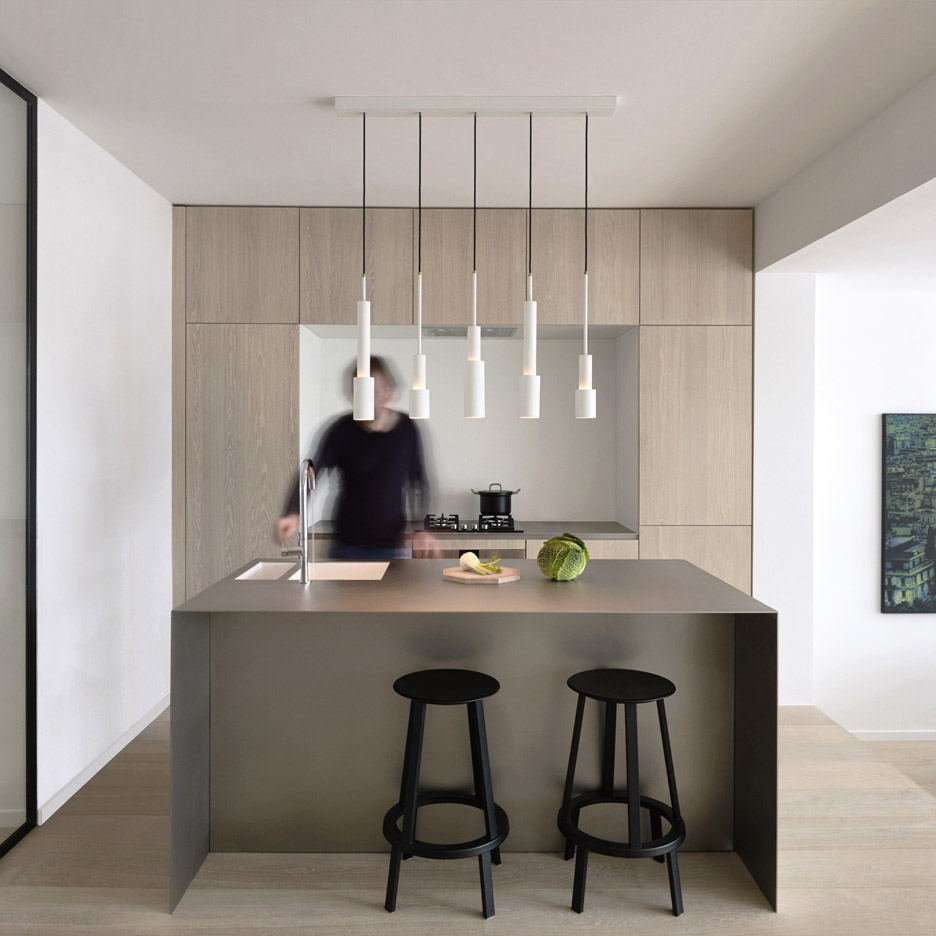 Each of the rooms is distinguished by a different flooring material, some of which were retained from the original interior, while others have been introduced to complement the new functions of the corresponding spaces.

"Materials of quality and in coherence with the global concept were kept, like the wooden floor in the bedroom and the tiles in the study," explained Lagerström. "The rest were taken out."

The entrance area features wooden floor boards that are aligned perpendicular to those in the adjoining living and dining space. This room's generous proportions optimise the natural light entering through the glazed doors at the rear.

Poured concrete flooring in the kitchen is complemented by grey cabinets, as well as a marble counter and backsplash that matches the surface of the dining table.

During the demolition of a wall in this space, a group of pipes was discovered that could not be removed and had to be integrated into the design of the kitchen.

A small study situated next to the living room has a tiled floor in the "sol en casson" style – made from pieces of variously coloured broken tiles and typically found in Parisian brasseries.

Floorboards in the bedroom are painted white to maintain the bright and neutral feel of this space. The hexagonal tiles used throughout the bathroom are also predominantly white, with black accents echoing the door frame and furniture.

The bedroom features a walk-in wardrobe that was stipulated by the clients, who both work in fashion. A wall behind the bed forms a partial division while retaining the space's overall proportions.

The previously heterogenous and incoherent interior is now united by the consistent use of white-painted walls and monochrome materials.

"The white, black and grey colour palette was chosen to enhance the light and to create strong graphic contrasts," added architect Sami Aloulou.

Septembre has been established since 2010. The studio has previously converted a rustic farmhouse in the Loire valley into a modern summer retreat and designed the interior of a Paris culinary workshop featuring a plywood storage and display wall.