American firm Silo AR+D has included multicoloured LEDs that are controlled by a smartphone on the exterior of this Arkansas home (+ slideshow).

It serves as both a family home and a workspace.

The design stemmed from a mix of factors, including site limitations and economic constraints.

Built on a sloped site, the home is positioned at an angle in order to preserve two large catalpa trees.

The orientation also takes advantage of northern light and provides south- and west-facing views of an adjacent forest and distant mountains.

T-shaped in form, the building consists of a rectangular bar stacked atop a smaller box, forming cantilevers on opposing sides of the house.

Beneath the overhangs are a carport on the west and an outdoor room on the east.

"The cantilevers, in concert with the dramatically sloping site, give unique views of the natural landscape to each living space, creating a private enclave amidst the tree canopy," said Silo AR+D. 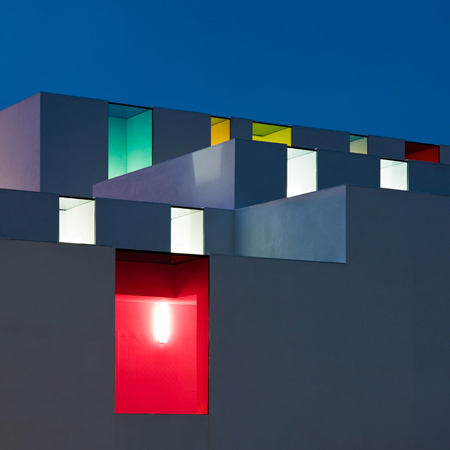 The firm was founded in 2009 and is based in Arkansas and Ohio.

On the underside of each cantilever, the architect concealed multicoloured LEDs within soffits made of laminated veneer lumber.

The LEDs, which are controlled by a smartphone, can glow a single colour or many hues at once.

"Colours are derived from the temperament of the house and directly by the owners' desire,” said the firm.

"The Mood Ring House explores how architecture can have different day and night presences, with distinct experiential and spatial qualities," the firm added.

In addition to creating a distinctive home, saving money was a driving force during the design process, said the architect.

"To keep costs down, the house is constructed primarily of generic, off-the-shelf materials, detailed to mask their humble character," the studio said.

The envelope is made of fibre-cement vertical siding and twin-wall polycarbonate panels.

Narrow metal strips, or reglets, were placed between the panels and painted to match the siding finish.

The sloped roof consists of steel sheets coated in aluminium-zinc alloy. On the upper level, a balcony is bordered by a chain link railing.

Inside, the architect placed work areas on the ground level and living spaces above.

The home features a restrained palette of whites and light woods.

"Interiors are articulated and finished to enhance the expansive and overlapping relationship between spaces,” the firm said.

The home's colourful night-time exterior has apparently been an inspiration to neighbours.

The firm said nearby homeowners have put multicoloured LEDs in their porch lamps, "transforming the neighbourhood into a Rainbow Light District".

Other recent residential projects in the American South include a lakefront dwelling in Texas by Wernerfield and a low-cost rural house in Tennessee by Designshop.