Architecture firm ANMA has completed a new Paris headquarters for France's Department of Defence, featuring a faceted roofscape that extends to the ground around the entrance (+ slideshow).

The Hexagone Balard building is located on a large plot next to the main ring road in Paris's 15th arrondissement.

It was designed by Agence Nicolas Michelin & Associés – also known as ANMA – to accommodate almost 10,000 staff across a floor area of 165,000 square metres.

A key objective of the project was to bring together members of staff representing the army, navy and air force.

Intended as "city within a city", the building also houses public and semi-public spaces including a health centre, nurseries and a swimming pool.

The project is separated into three parts, with an area on the eastern edge of the plot occupied by refurbished structures that were integrated into the masterplan, while a new structure to the west contains offices and shops.

At the centre of the site is a hexagonal void surrounded by offices for the highest ranking officials and operational divisions. Adjacent to this is a protected historic building that was restored and repurposed.

The elevations visible from the adjacent streets feature sheer facades clad in panels of white ceramic and etched glass that incorporate bands of windows.

The resulting stratified aesthetic is intended to lend the structure a serene yet robust presence, and the materials used prevent anyone from seeing inside.

"The building is oxymoronic; both sovereign and discreet," said a statement from ANMA, which was also behind a housing development in Bordeaux with a saw-toothed roof and a glazed atrium. 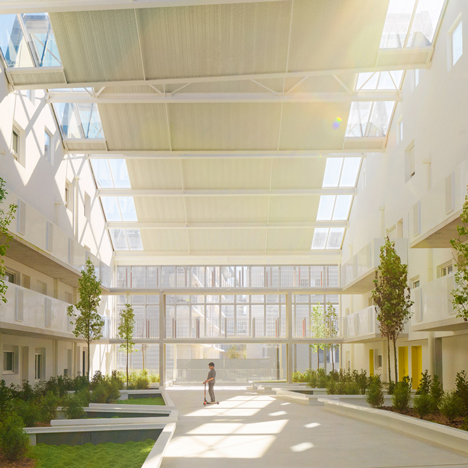 "The architecture oscillates between its external monumentality, with 'facade-cliffs' pierced by a real drawbridge, and its interior garden landscapes, offering views from one end of the building to the other."

From the nearby elevated ring road, the only view is of the faceted roof, which rises gradually from its edges towards the most important spaces at the centre of the building.

The roof's angled surfaces are described by the architects as resembling an "origami of metal panels and solar glass", which are punctuated by three chimneys symbolising the three armed forces.

"Opposite to the Parisian ring road the fortress leans, revealing only the roof of the building," the architects added. "This fifth facade is a vast levitating topography, an unusual landscape in the Parisian setting."

The overall scheme references the masterplan of the surrounding streetscape, with buildings of six or seven storeys arranged around planted courtyards.

Office floors are distributed around the gardens, ensuring every room has a window looking onto a view of nature.

The open-air voids help to break up the density of the building, ensuring light can reach the central areas and facilitating natural ventilation throughout the interior.

The historic building that was incorporated into the scheme was designed by the famous architects Auguste and Gustave Perret and constructed in 1934.

Its facades were carefully restored and a new metal roof was added to achieve consistency with the rest of the project.

One side of the building's U-shaped plan intersects with the new facility, while elevated glazed walkways connect the opposite wing with other parts of the campus.

Photography is by Cecile Septet, unless otherwise stated.