London-based HÛT was asked to refurbish and extend a Victorian property in London's Mile End, improving the flow of internal spaces.

Like many homeowners in the British capital, the clients were hoping to increase the value of the building – a motivation that has contributed to an explosion in the house extension market for London's architects.

The owners of Mile End Terrace, a couple who live with friends, were keen to create rooms suited to entertaining and relaxing. They also wanted to improve the relationship between the internal spaces and the garden at the rear.

HÛT – whose previous projects include a pre-weathered steel house extension in Hackney – focused on opening up the compartmentalised interior by removing unnecessary walls and increasing ceiling heights wherever possible.

At the rear of the house, the architects took the opportunity to extend an existing half-width closet wing downwards by excavating 1.3 metres to create space for an extra half-flight of stairs.

By dropping the floor level, the closet wing becomes a two-storey structure able to accommodate new spaces including a bathroom on the upper level and a living and entertaining space below. 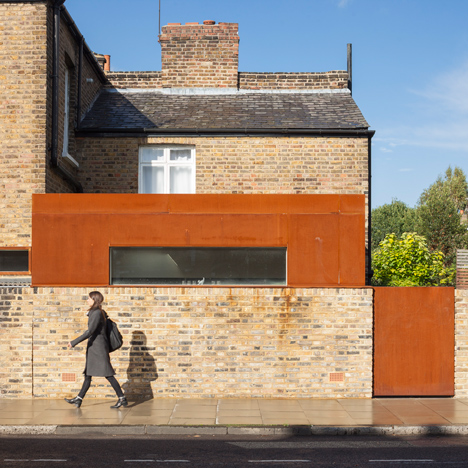 Next to the closet wing, an existing brick extension was removed and replaced with what the architects described as a "jewel-like glass box extension" that opens onto a sunken patio. A half-indoor, half-outdoor bench links the two spaces.

"The glass box actually helps reinforce the original plan form of the listed building, as its predecessor was a solid mass that was not complimentary to the closet wing," Sophie Determann of HÛT told Dezeen.

"And of course it helps bring daylight deep into the centre of the house where the kitchen is located, and gives views into the lovely garden."

Throughout the project, the architects sought to retain or restore original features, as well as maintaining the Victorian aesthetic of some of the key rooms and spaces, including the staircase.

"The retention of the listed building's staircase form and location was central to the scheme," Determann explained. "As a key traditional feature, all of the spaces relate to this."

"Original historic features were retained wherever possible, and beyond these were opportunities for new additions to be deliberately modern in their form," the architect added.

"Traditional materials like brick and slate were then used in the new modern elements to unify the spaces."

At the front of the house, an original parapet was rebuilt and traditional railings were installed to match the existing remnants. Internally, details like the cornicing, ceiling roses, fireplaces and a fanlight above the door were reinstated.

The sharp, modern detailing of the glass extension is complemented by crisp white walls, while slate flooring and exposed brick introduce a sense of heritage that is accentuated by the kitchen cabinetry and vintage furnishings.

In a recent future published on Dezeen, several leading architects talked about the growing trend for innovative extensions in London, which is being fuelled by a growing appreciation for contemporary design coupled with the spiralling cost of land in the city.

Determann claimed that extensions can offer "a very challenging and exciting brief" and feels a more supportive attitude towards these projects being shown by some local planners is encouraging architects to pursue interesting new directions.

"Many London boroughs are quite enlightened in their acceptance of bold forms of architecture, especially when partially concealed by an existing building," she suggested.

"The public and media's interest in architects' imaginative approaches to such additions means that these previously under-valued works are increasingly popular and exciting."

Photography is by Heather Hobhouse.