A growing thirst for contemporary design is transforming the market for house extensions in London, according to architects working in the city (+ slideshow).

While 20 years ago architects might have been embarrassed to talk about their extension work, or saw it as a platform to help get them bigger projects, today there are studios that have built their businesses up around domestic architecture.

This change is being fuelled by a growing appreciation for contemporary design among the UK public who, thanks to television shows like Grand Designs and websites like Dezeen, are waking up to the value of architecture, and are becoming more ambitious in their commissions.

This, coupled with the growing difficulty of finding affordable land in the capital, has created a demand for architects that can come up with creative solutions for extending up, down or out.

"The ambition has gone up and I think tastes have improved," he told Dezeen. "You used to get quite a few people who would say they didn't want anything different from the house they'd got, they only wanted more space.

"Whereas now there is the idea that contemporary spaces can be great places to live in."

Farringdon-based architect Paul Archer has come to the same conclusion. Since he set up his studio in 1999, he claims that the public perception of contemporary design has "done a complete reversal".

"The UK general public perception of design has fundamentally changed in the last 20 years," he told Dezeen. "I remember going to parties in 1989 where, if you admitted you were an architect, you'd get a lot people agreeing with Prince Charles and having a go at you about horrible Modernism."

"But if you think about the basic starting points for Modernism, it's about space and light," he said. "And those two criteria are how people approach their homes at the moment. There's been a real shift in what people aspire to for a place to live."

Evidence of this explosion is on show at the Building Centre, where 84 examples of house extensions and alterations are being presented as part of the annual Don't Move, Improve! competition.

Television presenter Kevin McCloud told Dezeen the scope for creativity in a house extension is comparable with museum extensions by architects like David Chipperfield. "It's the same thing at a different scale," he said.

McCloud, 56, presents the British show Grand Designs, which follows the story of people who build their own homes. He claimed that every good small practice he knows does extensions – rubbishing the notion that architects might see these projects as stepping stones.

"I know a lot of architects who have thrived, and are really proud of the work they're doing modifying and adapting existing buildings – it's the bread and butter," he said.

"It's not just adding an extension, it's actually completely reconfiguring and altering a space, and the experience of people in that building. It's quite complex work." 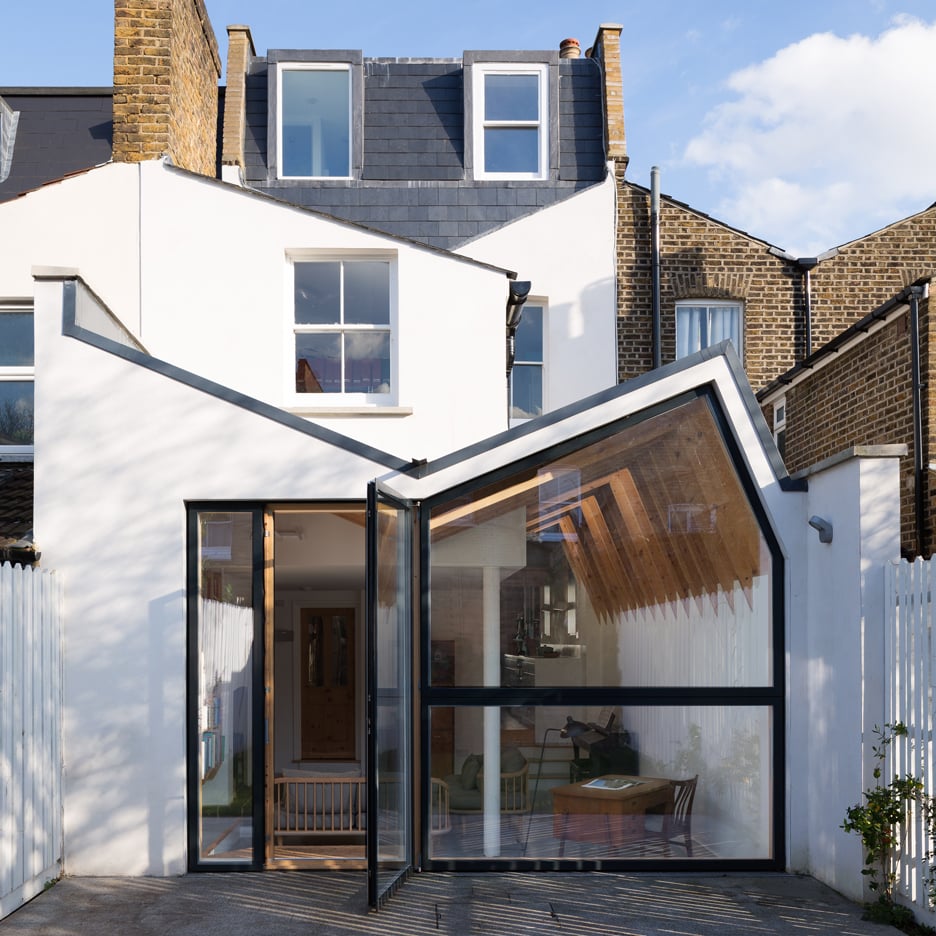 According to McCloud, people have learnt to trust in architects and understand the value of what they do.

"I think that people living in a London townhouse, but who would love to live in an open-plan single-storey Modernist building, can actually now enjoy both," he told Dezeen.

"I don't think 20 years ago that was always what they wanted or understood, or felt they needed."

The rising value of land in the capital has undoubtedly been one of the biggest catalysts for the sea change. With properties almost guaranteed to increase in worth in just a few years, extensions can be seen as good investments rather than just vanity projects.

Coffey Architects founder Phil Coffey said he often tells clients he can make them money by extending their homes.

"In the end we say we're free, because the money we cost is nothing compared to the return the client gets on a proper piece of architecture which transforms a house and blows the budget on the street," he told Dezeen.

"We make our clients a fortune and then they sell and move on, even though it's never in their minds to do so when they start."

Without the risk of loss, more and more owners are willing to invest, which in turn has created opportunities for dozens of recent graduates and small studios. Jerry Tate described it as "a kind of business incubator for young practices".

Among these is Fraher Architects, a studio set up by young architects Joe Fraher and Lizzie Webster in 2009 with a particular focus on residential projects.

"We found that a lot of people want to extend because they don't have the money to upscale," explained Webster, "and it's the stuff where people will take a punt or a gamble on you, even if you don't have the huge portfolio."

The scope for imagination in residential design is huge, according to Webster, with projects ranging from simple kitchen extensions to new basements and lofts, and even whole house reconfigurations. And this is all down to a greater appreciation for the value of design.

"Architecture has become much more accessible," she said. "Grand Designs has been great in opening the realm of architecture and architects up to everybody, and sites like Dezeen publish images wide and far, so it's much easier to look at good design."

What all of these architects agree on is that the demand for home extensions will only grow as time goes on, and projects are continuing to become more challenging as ambitions increase.

"A lot of architects assume that domestic design is dead easy, because 30 or 40 years ago it was," said Archer. "But it's much more of a specialism these days, and our houses are becoming far more sophisticated as a result."