London's Gallery Fumi is showing a collection of pieces at the PAD Paris fair encompassing new work by designers and artists including Study O Portable, Glithero and Johannes Nagel (+ slideshow).

London design studio Study O Portable has created a series of side tables that resemble logs sawn in half.

The furniture has been created using layers of a gypsum-resin composite called Jesmonite, which is then cut across the middle to form a tabletop and reveal the central circular pattern.

French sculptor Thomas Lemut has also contributed new furniture, designing a striped console made from contrasting sections of copper, steel and brass held together by rods.

London design duo Glithero is showing its Les French collection, which features tables and shelves in various heights, made from scaffolding frameworks that were created in bamboo before being cast in bronze.

German ceramicist Johannes Nagel has partnered with Berlin artist Lukas Wegwerth to design a series of porcelain vessels. The vases have been made from broken pieces that have been put back together by growing white and pink salt crystals around them. 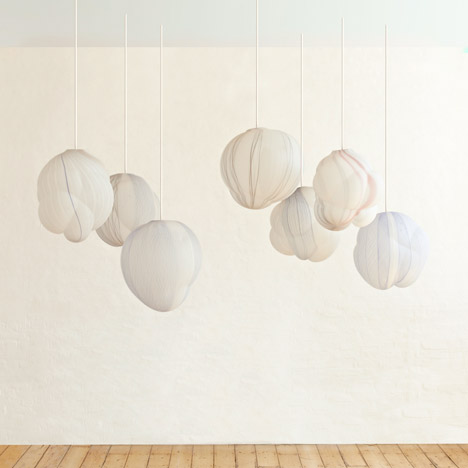 Nagel is also showing more of his ceramic work, including a set of irregular vases that include tentacle-shaped protrusions.

Work by Max Lamb is also on display, including his red and orange lacquer Urushi stools. Gallery Fumi has long shown pieces by the British designer, exhibiting a collection of furniture made from wooden dowels in 2011, and a chair made from folded steel in 2008. It also supported Lamb's My Grandfather's Tree installation at London Design Festival 2015.

Jeremy Maxwell Wintrebert has also contributed to the PAD exhibition, with a chandelier made from sections of glass that have been stuck together like honeycomb, and Sam Orlando Miller is showing a faceted pink-tinged mirror framed in bronze.

Gallery Fumi is located on Hoxton Square in east London. It was founded by Valerio Capo and Sam Pratt in 2008, and commissions both emerging and established designers to experiment with materials for design pieces.

PAD Paris is taking place in the French capital from 29 March to 3 April 2016.