London design studio JamesPlumb has revisited an antique textile that is created using medieval techniques, and has this time used it to create a limited-edition bench.

The studio, made up of artists James Russell and Hannah Plumb, designed the piece as a continuation of its Burnished Indigo project.

Unlike the previous collection, which included an elaborate lampshade and a Chesterfield sofa, JamesPlumb created the bench to showcase the "architectural qualities" of the textile when in its rawest form.

"We have been working with this fabric now for over two years," the duo told Dezeen. "When we first came across it we were immediately mesmerised by its hypnotic depth of colour, and incredible texture." 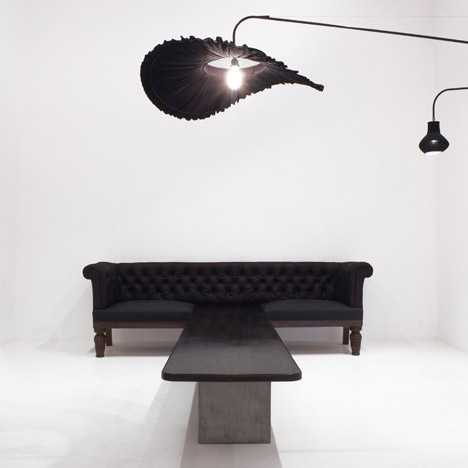 "In this new piece we wanted to celebrate the sculptural almost architectural qualities of the textile in a very raw form."

The dying process, which the designers describe as a ritual, involves repeatedly submerging the fabric in the deep blue dye mixed with egg whites, ox or pig's blood and fermented fruit juices to help the material take the colour.

The fabric is then beaten with wooden mallets or placed under large smooth rocking stones, to increase the level of sheen. Rather than dying fresh fabrics, JamesPlumb used existing material that had been treated using this technique.

"For the Indigo Bench our process was the same as the Chesterfield Table – repetitive soaking, drying, scrunching, attacking, beating," they said.

"But the difference is that we then wanted to let the fabric just show its incredible qualities rather than be overworked, and then contrast that with the controlled deep buttoning."

The Bench was created in a limited run of eight, and will be on show at Gallery Fumi's stand at the PAD London fair, taking place this year from 3 to 9 October.

To coincide with the launch of the piece, JamesPlumb wrote a poem detailing the process behind their own treatment of the antique textile.