Milan 2016: British designer Lee Broom will recreate part of an Italian palazzo inside a delivery van for a travelling installation to showcase his latest 90s-inspired lighting collection.

Broom's Salone del Automobile installation will be an all-grey recreation of part of a palazzo inside his studio's everyday delivery van, complete with corinthian columns and stuccoed details.

The van will drive from London to Milan where it will move to various locations during the design week, including Brera Design District, Spazio Rossana Orlandi, ZonaTortona, San Gregorio Docet and Ventura Lambrate.

Dezeen will be collaborating with Broom to document the installation and its journey around the city, including a Broom and Dezeen party on Tuesday night. 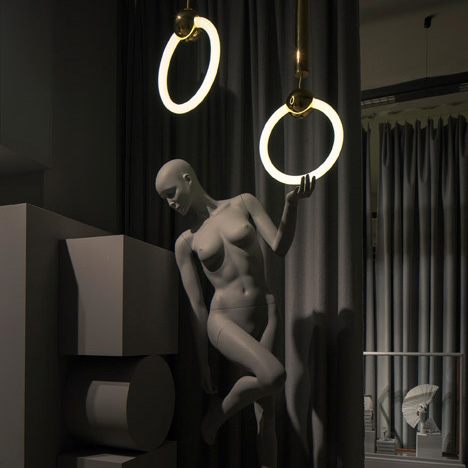 Broom described the project as a "surreal roadshow". "While deciding where I should exhibit I thought 'what about everywhere?'" he said. "My designs are often surreal and the idea behind the installation is to see something unexpected – a captivating optical illusion."

From the outside, the van will appear as it normally does with the installation revealed when the back doors are opened. An illuminated floor will help make the effect more dramatic.

Broom's new Optical lighting collection of floor lamps and pendants will be displayed inside. The globe-shaped lights feature a pattern of black stripes around one end.

The area where the lamp meets its support is a circle of solid black, while the stripes are cut into sections to create optical effects. Broom said the pattern was inspired by designs from the 1990s.

"It's really inspired by the period in which I grew up in," he said. "I guess my first real foray into interiors was decorating my own bedroom in the early 90s and Optical really reflects the monochrome graphics and mood of that era."

The floor lamps sit on short, round black pedestals or thin black stems with a round base for stability.

Broom is known for his ambitious installations. Salone del Automobile follows one from the designer's Department Store exhibition during Milan design week 2015, which saw him turn a row of empty shops into a mock store filled with his products.

For last year's London Design Week, he turned his Shoreditch showroom into a flower shop to present furniture and vases.

Both installations featured all-grey props and scenery, in the same shade that Broom uses for his branding.

Other designers working on installations for this year's Milan design week, which takes place from 11 to 17 April, include Japanese architect Sou Fujimoto, who is creating a "forest of light" for fashion brand COS.