Venice Architecture Biennale 2016: pavilions that host exhibitions for the Venice Biennale are boarded up for six months every year, and Dutch studio RAAAF thinks a better solution would be to cover each one with a veil of fabric.

There are 30 national pavilions in the Venice Giardini, the park that forms one of the two main venues of the art and architecture biennales. During the winter season, most of these are sealed up and many are subjected to graffiti.

RAAAF – a multidisciplinary studio based in Amsterdam – claims this transforms the park into an "urban wasteland". Working with architect Marcel Moonen, it has developed a solution it believes could make the space more welcoming for visitors.

The team suggests wrapping each structure with an engineered textile shroud. These coverings would protect the buildings from vandalism and shelter them from bad weather.

The result would be a transformation of architecture into abstract sculptures, according to the designers. RAAAF calls the project Giardini in Silence.

"RAAAF proposes to give the Giardini back to the people," explained Ronald Rietveld, who co-founded RAAAF with brother Erik Rietveld. "It could become a counterpoint in a city that is overcrowded due to mass tourism, a public space of silence and contemplation." 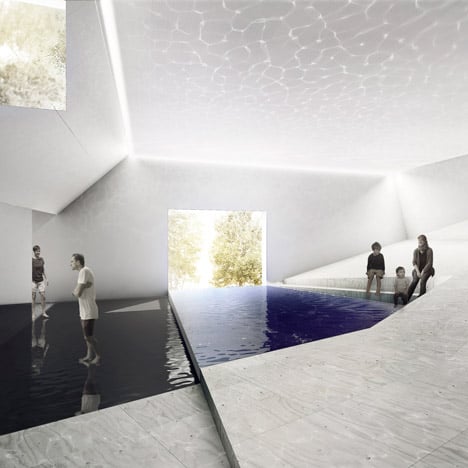 "The metamorphosis reflects an abstraction away from the architecture and extraversion of the national pavilions with their annual statements," he added. "The intervention creates a contemplative atmosphere on the scale of the Giardini as a whole."

Ronald and Erik were invited to curate the Dutch Pavilion for the 12th edition of the architecture biennale in 2010. Visiting the site in early May, they were surprised to find many areas closed.

They believe their proposal offers a viable alternative to this, and have secured funding from the Mondriaan Fund and the Netherlands Organisation for Scientific Research to try and make it a reality.

"We hope the city of Venice will also embrace this vision," added Ronald.

The Giardini has been a venue for the biennale since 1895.

Several of its pavilions were planned by famous architects, for instance, the Austrian Pavilion was one of the last works of Josef Hoffmann, the Dutch Pavilion was designed by Gerrit Rietveld and the Finnish Pavilion is the work of Alvar Aalto.

A new building was also added to the park in 2015 – Denton Corker Marshall's austere black box looming over the canal is Australia's national pavilion.

RAAAF, short for Rietveld Architecture-Art-Affordances, previously went by the name Rietveld Landscape. Other projects by the studio include a building seemingly filled with fire and a second world war bunker sliced open to create a visitor attraction.