Hadid, who died suddenly on Thursday at the age of 65, was remembered during this year's ceremony at the United Nations Headquarters in speeches given by both Aravena and Peter Palumbo, chair of the Pritzker jury.

Palumbo said that a private dinner held for former Pritzker laureates the night before the ceremony had included a one-minute silence in honour of the Iraqi-born architect, who was the 2004 Pritzker Prize winner.

"At a dinner last night given by Cindy Pritzker for past laureates, together with the members of the jury and their wives, we stood for a minute's silence as a tribute to Zaha Hadid, the 2004 Pritzker Prize laureate and therefore by definition a member of the extended Pritzker family," said Palumbo. 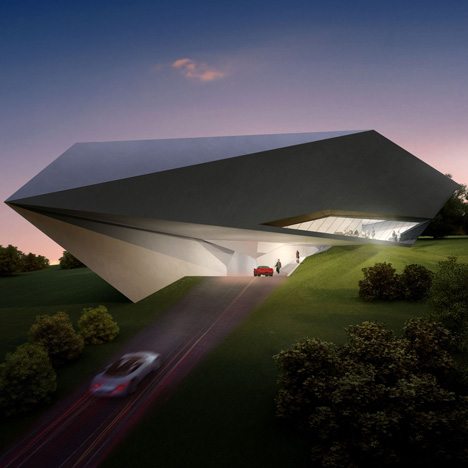 "This brief eulogy gives me no time to speak about Zaha in any depth – her singular brilliance as an architect, her role as a standard bearer for the equality of women, and her staunch and unremitting opposition to prejudice in its many forms, in all of which she received a level of worldwide recognition given to very few," he added. "I shall simply remember here and now – this complicated, contrary and utterly wonderful lady of indomitable spirit – as she was to her friends; loyal, compassionate, gentle, kind and always funny."

Palumbo, who is a former developer and past chair of the Arts Council of Great Britain as well as an architecture patron, also shared his last conversation with Hadid.

"Most of all I shall miss her voice on the telephone only a few days ago mimicking faultlessly the cockney accent from the East End of London, where she lived," he said. "Our conversation went like this: 'allo Peter' she said, 'hello Zaha love' I replied, 'what's up?' 'Nufink much,' she said. 'Ain't feeling too good today. Can't manage them apples and pears,' – cockney slang for stairs – 'but hope to see you in New York on the 4 April." She never made it of course. But here we all are for you Zaha love, in death as in life."

Aravena also began his acceptance speech with a tribute to Hadid.

"I can't start this evening without a mention to Zaha," he said. "When we got the news last week we just couldn't believe it. Or maybe we didn't want to believe it."

"As Rafael Iglesia, an Argentinian architect that also died too early of a heart attack last year said once, it is always very sad when a person that still has a lot to offer dies prematurely," he added.

"Zaha received the prize in 2004 for her great contribution to architecture, her work as well as the work of the other laureates, is celebrated by the prize as the highest level that architecture has been able to achieve."

Aravena, 48, is the 41st recipient of the Pritzker Prize, which is architecture's highest honour and considered to be the industry's equivalent to the Nobel.

The audience at Monday's ceremony, which took place in the General Assembly Hall at the United Nations Headquarters, also included architects Bjarke Ingels, David Adjaye, and Diébédo Francis Kéré, among others.

Also in attendance were leading curators including Paola Antonelli, Beatrice Galilee and Zoe Ryan, friends of the Pritzker family, Aravena's family and colleagues, and a select group of journalists.

Hadid had been planning to attend both the ceremony and a panel discussion about the future of architecture the following day, but died of a heart attack in Miami after going into the hospital to be treated for bronchitis.

Dutch architect Rem Koolhaas, who had been friends with Hadid since meeting her at London's Architectural Association in the 1970s, told Dezeen that she was "somebody with a rare kind of courage".