Nearly 1,400 people have signed a petition in opposition to Bjarke Ingels Group's proposal to demolish a portion of the Smithsonian Institution campus in Washington DC.

A concerned citizen started an online petition on 5 April 2016 in an effort to halt or at least modify the plans regarding the Smithsonian's Enid A Haupt Garden, which would be razed to make way for a new plaza.

The plans are part of the Smithsonian South Mall Campus Master Plan, which was envisioned by the Danish firm Bjarke Ingels Group (BIG) and first unveiled in 2014.

The sweeping plan calls for upgrading outdated facilities and improving circulation for visitors to the site, which encompasses roughly 17 acres (6.9 hectares).

Part of the scheme entails demolishing the four-acre (1.6-hectare) Haupt Garden and its historic gates and walls, along with three museum entrance pavilions that are located in the park. The entrance pavilions lead to the National Museum of African Art, the Arthur M Sackler Galley and the S Dillion Ripley International Center.

The garden, which opened in 1987, would be replaced with a plaza that is described by BIG as a "carpet" with its corners turned up. The floor of the plaza would have glass panes, which would serve as skylights that enable light to enter below-grade spaces.

The petition garnered 500 signatures within two days, according to Curbed. As of today, it has nearly 1,400 signatories. 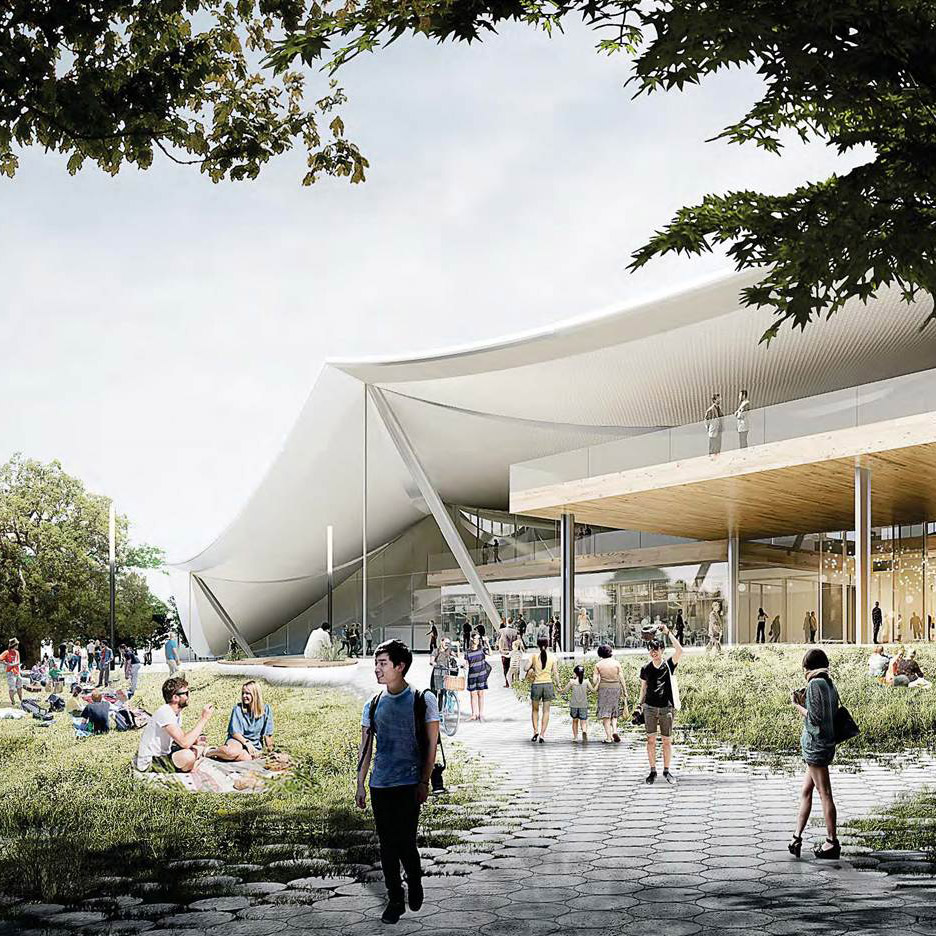 The citizen, Sylvia Cabus, said the garden is a cherished site. "We go there regularly, and it is a wonderful destination for my family," she told The Washington Post. "It really is a jewel."

Last month, a former curator for the Smithsonian Institution, James M Goode, also criticised BIG's plan in an editorial for The Washington Post. He described the garden as "one of Washington's most beloved outdoor spaces" and "one of the few peaceful and contemplative places on the Mall".

The campus is located on the southern edge of the National Mall, a federal park in central Washington DC that draws 24 million visitors per year.

"Bjarke Ingels's replacement is a wasteland of skylights reminiscent of a regional shopping mall," he wrote. "The erupting 'swoops' of turf, glass and steel lack respect for the surrounding historic buildings. Peaceful and contemplative are replaced with arid, windswept and unfriendly."

He said the demolition plans for the garden and pavilions are being challenged by the National Trust for Historic Preservation, the DC Preservation League, and the Committee of 100 on the Federal City, a nonprofit organisation focused on land use in Washington DC.

Goode said BIG is known for its "bold, futuristic and bravura-packed designs" and wondered why it was chosen for the Smithsonian project. "The selection of this firm for a project demanding subtlety, nuance and sensitivity to a historic setting is questionable," he stated.

The National Capital Planning Commission – which must approve the project – voiced concerns about the masterplan during a meeting last Thursday, according to reports.

"It's causing great anxiety," Commissioner Peter May, associate regional director of the National Park Service, was quoted as saying. "If we put this on the anxiety spectrum, this is at the top."

Dezeen contacted BIG on Monday but has yet to receive a response.

Haupt Garden fronts the historic Smithsonian Institution Building, or The Castle, which was designed by noted 19th-century architect James Renwick Jr. The garden opened in 1987 and replaced an older garden dating to 1976.

BIG's masterplan was first unveiled in November of 2014. If approved, it will be implemented over a period of between 10 and 20 years, costing a total of $2 billion (£1.4 billion).

The Smithsonian Institution was established in 1846 and is the world's largest museum and research institution. It has 19 museums, nine research centres and other facilities spread across the US, although most are located in Washington DC.

Copenhagen-based BIG has rapidly expanded its presence in the USA and Canada since launching its New York office in 2010. It is partnering with Thomas Heatherwick on the new Google headquarters, working on a skyscraper for New York's Hudson Yards, and designing a new football stadium for the Washington Redskins, among many other projects.