In what has been described as the biggest project in the National Mall in over a century, BIG plans to restructure the home of the 168-year-old institution – the world's largest museum and research complex – upgrading its outdated facilities and improving its legibility to visitors. 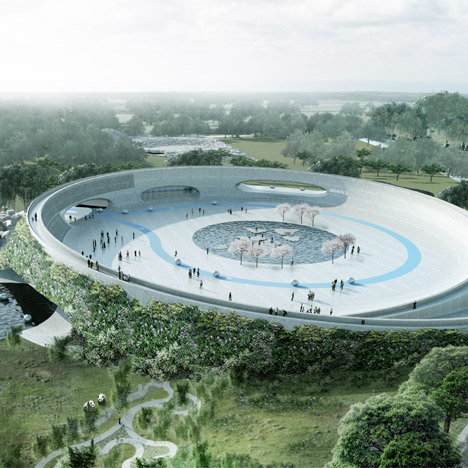 The project will centre around the renovation of the Smithsonian Castle, the red-stone building that currently serves as the Smithsonian's headquarters, but will also include new mall-facing entrances to the National Museum of African Art and the Arthur M Sackler Gallery.

The New York- and Copenhagen-based architects also plan to improve visibility and access between the Freer Gallery of Art, and the Hirshhorn Museum and Sculpture Garden, including the addition of a new courtyard with a sunken-fountain.

"It's a great honour and a humbling challenge to reimagine one of the most significant American institutions on the front lawn of the nation's capital," said Bjarke Ingels, who also recently installed a maze in the city's National Building Museum.

"Together with the Smithsonian – with whom we have worked closely over the last year and a half – we have conceived a masterplan for the South Mall campus as an example of radical reinterpretation."

The plans include a new network of underground and overground walkways that will make it easier for visitors to navigate between the buildings and gardens running east to west along Independence Avenue.

Existing hard-to-find entrance pavilions will be replaced with glass-walled accesses. Meanwhile, the roof of the quadrangle building under the Haupt Garden will be replaced, allowing daylight into the underground complex for the first time.

"To resolve the contradictions between old and new, and to find freedom within the boundaries of strict regulation and historical preservation, we have chosen to carefully reinterpret the elements that are already present in the campus," said Ingels.

"By forging new links between the various technical, programmatic, logistical and curatorial demands, we have created a new landscape of connectivity and possibility. We believe this plan holds the potential to guide the Smithsonian South Mall campus into the future while remaining firmly rooted in its heritage," he said.

The castle, which first opened in 1855, will undergo a restoration of its Great Hall that involves removing partitions that cut its floor space in half. A two-storey underground space will also be created, providing visitor services, a cafe and a shop.

"The masterplan provides the first-ever integrative vision for the South Mall," stated Wayne Clough, secretary of the Smithsonian Institution.

"Bjarke Ingels Group has given us a plan that will offer open vistas, connected museums, galleries bathed in daylight, new performance venues, gardens that invite people into them, and it will visually attract visitors who will have an unparalleled experience," he said.

The masterplan will be implemented over a period of between 10 and 20 years, costing a total of $2 billion (£1.2 billion). The first works are set to commence in 2016, but a public meeting will be held in December to consider any alternatives.