Called the Central Energy Facility, the building encompasses 125,600 square feet (11,700 square metres). It is located on the west side of Stanford University's main campus in Palo Alto, California.

The new energy facility "respects Olmsted's original axial campus plan" and aligns with the school's central quad, said ZGF, a 500-employee firm based in Portland, Oregon, that was founded in 1942.

The energy complex consists of five distinct programmatic elements: a volume containing an entry court, administrative offices and teaching facilities; a heat recovery chiller plant; a power plant for the medical school and a children's hospital; an electrical substation; and a service yard.

The firm sought to lessen the plant's visual impact on the historic campus, which is well known for its Richardsonian Romanesque and Mission-style architecture.

The entry court is situated on the east side and faces the campus, while the substations are on the opposing side and look toward a golf course.

"The massing and arrangement of the various components minimise the overall facility's impact, with additional visual shielding provided by elegant metal screens," the firm said. 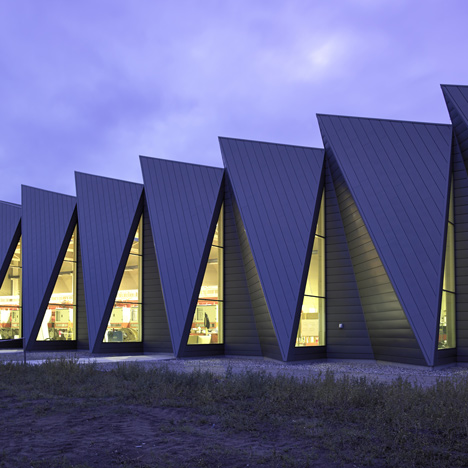 "The overall architectural expression is one of lightness, transparency and sustainability to express the facility's purpose."

The design team incorporated glass, dark steel columns and polished aluminium to create a contemporary aesthetic. To add warmth to an arcade, it used reclaimed wood to form the soffits.

Ample glazing on the administrative and teaching building ushers in daylight and also enables views both into and out of the building. A large photovoltaic canopy provides shade while also generating electricity for occupants.

"Glass-enclosed office spaces and an outdoor, multi-use room float above the entrance, providing views out to central campus as well as into the hub of the facility," the firm described.

One of the water tanks was painted cardinal red – the university's official colour – and is visible through a metal screen wrapping the basin.

"At night, lights directed through slender perforated steel columns transform the facility's centrepiece hot water tank into a red, glowing beacon that serves as the heart of the facility," the firm explained.

The building "embodies the latest technological advances in heat recovery".

The plant utilises software developed and patented by Stanford that predicts campus energy loads, grid prices and weather conditions – and then steers "the system to optimal efficiency". The software also reviews its own performance.

The plant is part of a university-wide initiative to reduce its dependence on fossil fuels.

Other measures include converting the heat supply for all buildings from steam to hot water, constructing an extensive heat-recovery loop system and drawing power from an off-site solar farm.

"This comprehensive Stanford Energy System Innovation (SESI) initiative will eliminate 150,000 tons of carbon dioxide emissions annually, the equivalent of removing 32,000 cars from the road every year," said the firm.

Other recent infrastructure projects include a water-cooling facility at Ohio State University by Leers Weinzapfel Associates and a salt shed and garage for New York's sanitation department by Dattner Architects and WXY.