Milan 2016: ten designers explore the nature of motion as part of Nike's Milan design week exhibition, which includes an installation of levitating marble by Max Lamb and a microclimate chair for athletes by Greg Lynn (+ slideshow).

For The Nature of Motion exhibition, the sports brand invited an array of international designers to create installations based around the idea of movement, which range from conceptual to practical.

"The goal for us to was to continue to think about this idea of natural motion, which is bedrock to Nike, thinking about how we design for athletes that are constantly moving and how that motion creates new languages, new designs and new problems for Nike to solve," vice president of global design John Hoke told Dezeen.

Located within a former industrial space in the south of the city, the space is divided up by walls made from white Nike shoeboxes that surround each of the installations.

On show in the exhibition is a microclimate chair made from both flexible and rigid carbon fibre by American architect Lynn, which cools and heats athletes between periods of exercise. 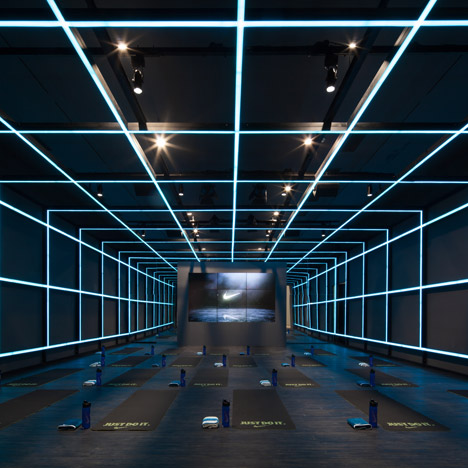 "There is a weight sensor in three corners so then we know how much fluid [an athlete] lost," Lynn told Dezeen. "The other thing is there are temperature sensors at the back of their legs and arms so we can take their skin temperature."

The sensors are linked to clusters of thermoelectric elements, which can selectively heat and cool different parts of the athlete's body to bring down their core temperature and prevent cramp.

Designed to challenge our perceptions of weight, British designer Lamb's installation consists of giant blocks of marble, aluminium and polystyrene that can be moved with just one finger.

Tubes pump air underneath the blocks, creating an "invisible film of compressed air" and causing them to effortlessly levitate.

British designer Sebastian Wrong has used Nike's woven Flyknit textiles as the basis for his design.

Wrong told Dezeen he drew on the way Nike can "knit extremely complicated patterns but also patterns with structure", and has created an intricately patterned chair with a sling-like structure from Flyknit textiles.

"What you have here is six chairs that are fixed together in a ring with a single skin over it, which is representing the woven graphic taken from a Futurist painting by Umberto Bioccioni called the Dynamism of a Soccer Player," he said.

"I thought about how plants move in different ways like open up during the day to bloom and close up at night, and how seeds can travel the world by wind or when it falls on an animals back," Adelman told Dezeen. "So I made these pieces inspired by plant life and incorporated this quiver to them, in a way as if they are blowing in the wind."

Clara von Zweigbergk and Shane Schneck have designed a collection of chairs each with a cork "sole" and lightweight seat, or "upper", which each require you to balance in a different way to take a seat.

Another design duo, Enrica Cavarzan and Marco Zavagno, has produced a range of oversized red floor lamps that mimic the actions of sprinting and high-jumping athletes.

The exhibition closes with three spaces occupied by experiments carried out by Nike's in-house team.

"When you pass through the final section, you move into an exhibit that explores some of Nike's past great innovations," said Hoke. "Then you head from the look backward to the look forward, which is an exploration in imagining and wondering what the future could look like."

In one of these final spaces, visitors can enter a textured corridor, in which Nike trainers that have been adapted to amplify the motion of the body are on show, while in another, origami trainers emerge from sheets of paper.

The Nature of Motion is on show at Via Orobia 15 for the duration of Milan design week, which opens today and runs until 17 April 2016. Check out Dezeen's guide to unmissable installations and exhibitions around the city »

The growing number of commercial brands presenting in Milan is emerging as one of this year's key trends.

"We have been here many years, looking and observing and witnessing Salone, and we felt it might be of interest to not just come and witness, but come and participate," said Hoke.