Large windows provide glimpses of a pair of swimming pools and a maroon sports court within this corrugated metal community centre by IDOM, located in Spain's Basque Country (+ slideshow).

The Salburúa Civic Center hosts a combination of sporting, cultural and administrative services in the new Salburúa neighbourhood of Vitoria-Gasteiz – the capital city of the region.

The different functions of the centre are distributed across the building's three levels, with a basement containing sports facilities; a cafe, lounge and conference room placed at ground level; and administrative areas, a library and pool set alongside dressing rooms on the first floor.

Glazed cut-aways in the corrugated metal facade give views down into the basement sports court from the street, while internal windows open up internal connections between the two lower floors.

"The building was designed to be abstract, moving away from the standard size and scale of the residential buildings surrounding the civic centre," IDOM told Dezeen. "This strategy was adopted to highlight its position within its environment."

"The volumetric configuration was divided into two parts. On one hand we have the main piece, white, a categorical volume, while on the other, the public spaces that disappear into glazed enclosures."

The top floor, however, has a more contained appearance. It features only a row of tall slender windows with the appearance of arrow slits to create a more solid and imposing volume.

"In contrast, the first floor has a less permeable, more abstract language, avoiding the usual human scale, in order to obtain a stronger and more powerful image," said the team.

The cast in-situ concrete facades are clad in sheets of white corrugated metal, a material that is also used for continuity purposes to finish a hall at ground level. 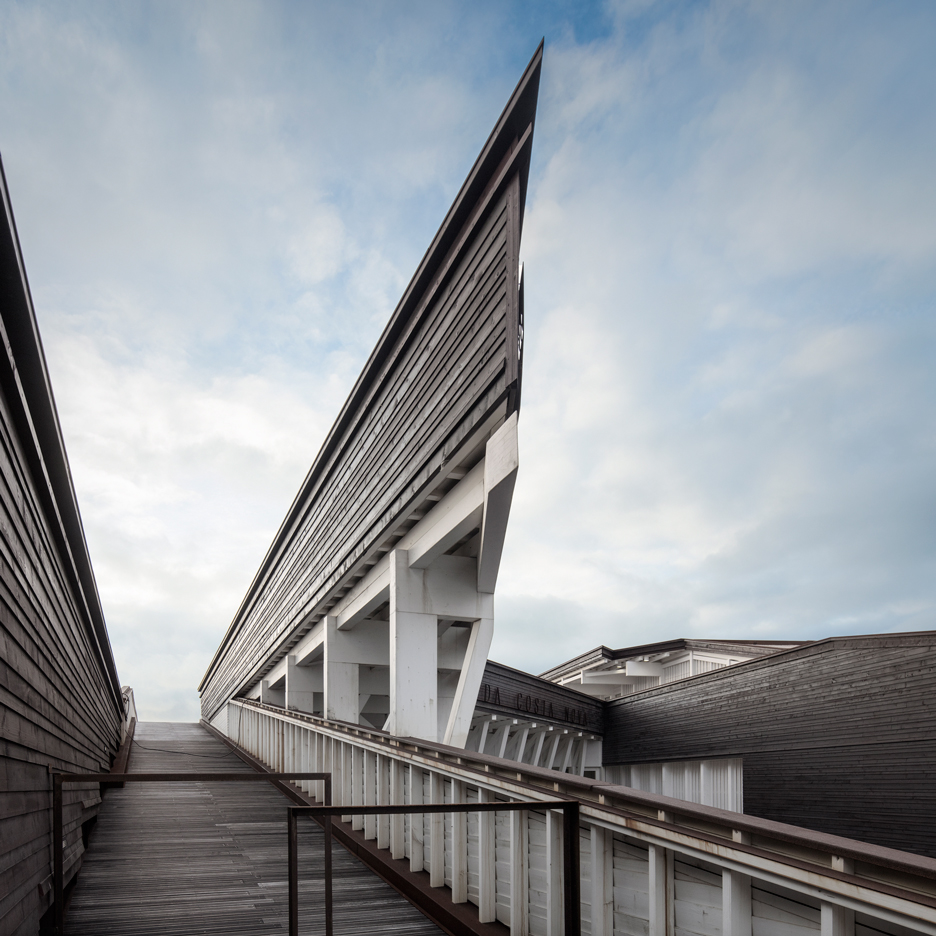 Strip lights are set into the grooves of the corrugated material, which has also been used to create suspended ceilings around a large circular light well.

Other spaces have a more raw appearance, with concrete blocks and steelwork left exposed.

"The savings made as a result of these design strategies meant that we didn't have to renege on aspects which are expected of a building of this calibre," IDOM told Dezeen.

"Our design included the extensive use of glass on the ground floor to transmit transparency; structural spans which enhance the spatial quality; and ample communication areas and courtyards, again enriching the spatial experience."

On the upper floor, a pair of swimming pools are arranged end-to-end and run the width of the building, where a pair of broad windows give swimmers views out over the city.

The pools are surrounded by non-slop epoxy resin flooring that leads out to the lock rooms, and a tiled shower area.

Beyond the changing facilities, a library is oriented towards the west of the building. Its windows are screened by a layer of micro-perforated cladding that still allows sunlight into the space.

"Openings in the facade correspond to the workshops and offices, seeking, on the one hand a homogeneous distribution of light while on the other, a rhythmic and formal sequence appropriate to the volume," said the team.

London firm Hawkins\Brown recently unveiled plans for a school swimming pool that uses abundant glazing to give users the sense of "swimming amongst the trees", while rounded windows and skylights allow daylight to filter into this Parisian pool by Mikou Studio that features a grassy rooftop solarium.

Photography is by Aitor Ortiz.