A subterranean shaft created by 19th-century engineer Isambard Kingdom Brunel is now accessible to the public for the first time in 150 years, thanks to a new staircase by architecture studio Tate Harmer (+ slideshow).

The so-called "sinking shaft" was designed by the eminent engineer as an entrance to London's Thames Tunnel, but the space has now been transformed into an underground performance venue.

Its former entrance – a small hole leading down to a now-removed staircase – has been replaced with a new opening, leading through to a contemporary steel staircase that descends down.

Tate Harmer's approach was to change as little as possible about the shaft, which was the first completed project by Isambard Kingdom Brunel, who went on to design the record-breaking ship the SS Great Britain and the Clifton Suspension Bridge in Bristol. 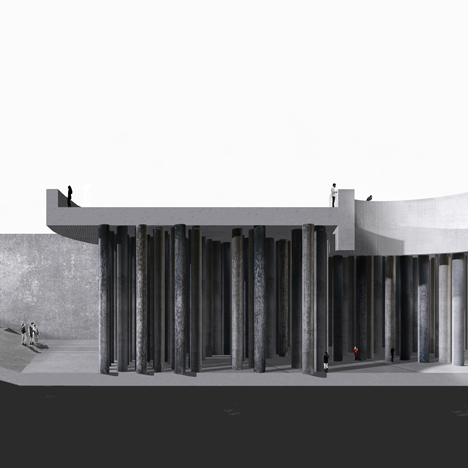 It was a huge visitor attraction when the Thames Tunnel – the world's first underwater tunnel – opened in 1843. But it was closed off in the 1860s when trains starting running through the tunnel.

"It's an incredibly powerful historical space," explained architect Jerry Tate. "So we made the decision to keep the space very raw and to not touch it all really."

"We cut a hole in the shaft so you can see what the shaft is made from, and we introduced this new staircase that provides this theatrical way down," he said.

The free-standing staircase features a dark-painted steel structure, but its handrail is finished in bright red. The aim is for the structure to sink into the background, but for the handrail to appear as a ribbon of colour.

"It's very minimal in terms of structure, it just touches the ground and it doesn't touch the wall at all," said Tate. "A red thread guides you to the very bottom."

Described by the team as a "ship-in-a-bottle design", all the parts of the staircase had to fit in through the doorway. They were then assembled inside.

The shaft marked the first stage in the construction of the Thames Tunnel, which was designed to allow horse-drawn carriages to pass under the River Thames between Rotherhithe and Wapping.

It was the only project that the two Brunels worked on together, and it now forms part of the London Overground rail network.

The Brunel Museum – a centre dedicated to the legacy of both Brunels – occupies the tunnel's former Engine House, right next to the shaft. The museum will now run the space as a venue for music performances, theatre and other events.

Dalston-based Tate Harmer is led by Tate and partner Rory Hartner. The firm's previous projects include a house extension framed by thick wooden ribs and a wooden treehouse inspired by a weaver bird's nest.

Tate Harmer isn't the first studio to revive a piece of disused railway infrastructure. Other examples include New York's High Line park, formerly an elevated train line, while an old tunnel in Italy is now a pedestrian pathway.

Photography is by Jack Hobhouse, unless stated otherwise.