Dutch multidisciplinary studio RAAAF has unveiled plans to expose the subterranean landscape beneath a demolished sugar factory in Groningen, creating a new public space amidst a forest of columns.

The aim is to create a new public space for the city, which could be used for exhibitions and installations, movie screenings, performances, and both public and private events. Named After Image, it will sit 12 metres below ground level.

"After the radical demolition of the sugar factory, only a seemingly desolate concrete area remained," explained explained studio directors Ronald Rietveld, Erik Rietveld and junior project leader Arna Mackic. "We discovered that beneath the surface of the site, where in the coming years new functions will be searched for, a colossal city of pillars is hidden."

The project runs in a similar vein to Thomas Heatherwick's proposal for the V&A Waterfront museum in Cape Town, which involves hollowing out the concrete tubes of a historic grain silo complex.

"By revealing this world of pillars, the soul of the site will reappear four years after the demolition and the site will be historically readable," said the trio. "Revealing the foundation of just one silo, an enormous concrete cathedral appears 40 feet below ground level that can function as a public space for the next 50 years."

The Suiker Unie sugar factory was demolished in 2011, and the site will eventually be developed for housing. The city council approached RAAAF to consider uses for the site in the interim, expected to last between 15 and 20 years.

"The first thing we did was get hold of the old construction drawings of the area," Mackic told Dezeen. "We found a drawing of the foundation pillars and we discovered that the entire area is covered with thousands of these underground pillars." 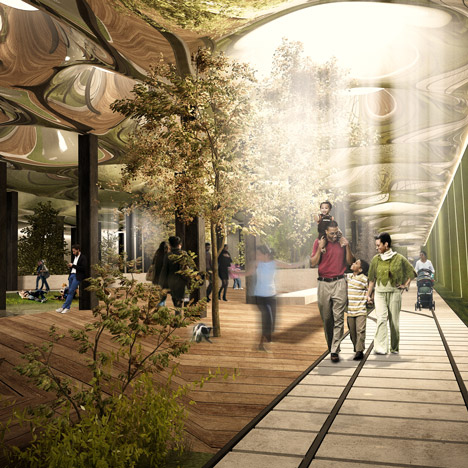 "We chose a strategically good spot to reveal some these pillars, a spot where a 60-metre-high silo was located. Now, with our intervention, it is a spot that could function very well as a public space."

After Image is the latest in a series of underground public space proposals, following plans to convert an underground trolley terminal in New York into a park, and a concept for walking and cycling routes in London's abandoned tube tunnels.

But this project could be completed by 2017, according to Mackic. She also suggests that it could be retained as a meeting place for any future housing community built on the site.

"It is really great that we can make a public space with existing elements, in an area where almost everything is demolished," said Mackic. "The foundation pillars were always there, but no one was really aware of it. Nothing like this is ever done before."

RAAAF, short for Rietveld Architecture-Art-Affordances, previously went by the name Rietveld Landscape. Other projects by the studio include a building seemingly filled with fire and a second world war bunker sliced open to create a visitor attraction.