The cavernous shaft created at the entrance to London's Thames Tunnel by eminent 19th-century engineer Isambard Kingdom Brunel is set to be transformed into a performance venue.

London architecture studio Tate Harmer has designed a new staircase that will, for the first time in 150 years, allow the public to access the sunken shaft in Rotherhithe – the original entrance to the world's first underwater tunnel, which now forms part of London's Overground rail network.

The so-called "sinking shaft" was the first completed project by Isambard Kingdom Brunel, who at the time was working for his father Marc Isambard Brunel.

It was flooded with visitors when the Thames Tunnel first opened in 1843, but from the 1860s onward, once trains started running through the tunnel, the space was used only for ventilation.

The Brunel Museum – which is dedicated to the legacy of both Brunels – has now unveiled plans to reopen the shaft to the public where it will become a venue for music performances, theatre and events.

Tate Harmer will install a new freestanding cantilevered staircase, completely independent of the historic structure. Described by the team as a "ship-in-a-bottle design", the staircase will allow visitors to walk down to the space.

It will be accompanied by a redesigned public entrance.

"It's a rare honour to work in such an important historical setting," said architect Jerry Tate. "We had to respect and protect Brunel's legacy while providing people the opportunity to enjoy the space in new and exciting ways."

The shaft marked the first stage in the construction of the Thames Tunnel, which was originally designed to allow horse-drawn carriages to pass under the River Thames between Rotherhithe and Wapping.

It was later sealed with a concrete floor, and in 2007 was closed to be refitted with new train tracks that allowed it to become part of the London Overground network in 2010. 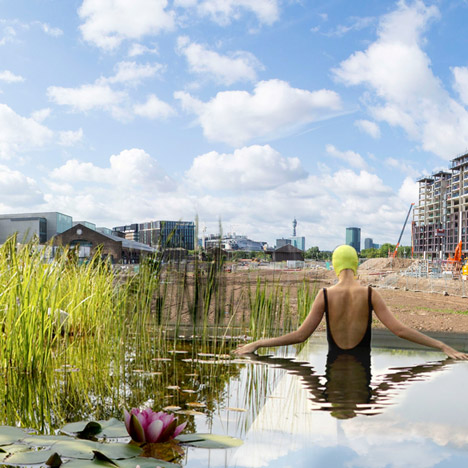 The Brunel Museum occupies the tunnel's former Engine House, immediately west of the sinking shaft. Once open, the space will form an extension of the museum's existing facilities.

"[Isambard Kingdom] Brunel was a showman as well as an engineer, and I'm sure he would have approved of holding performances in this new underground gallery," said museum director Robert Hulse.

"This will be one of the first exciting steps in the Brunel Museum's ongoing plans to preserve Brunel's first project and his enduring legacy for the enjoyment of the public."

Isambard Kingdom Brunel went on to develop SS Great Britain, the longest passenger ship in the world from 1845 to 1854, and designed the Clifton Suspension Bridge in Bristol, although it wasn't completed until after his death.