Milan 2016: Cassina's first collection under the direction of Spanish designer Patricia Urquiola is based on a reflection of the brand's past, and includes pieces by Philippe Starck, Ora ïto and the late Zaha Hadid.

Urquiola – who took over as art director at Cassina in September last year – described the brand's 2016 collection as an "evolution and exploration".

"This year we were going to have new dialogues with the 90th anniversary, and I wanted to arrive in a strong way," she told Dezeen at this week's Salone del Mobile furniture fair.

"I want to remind people that we are working with people who explore many arguments and many materials, and have an experimental attitude," Urquiola added. "I want to go on connecting the new relations with the new designers." 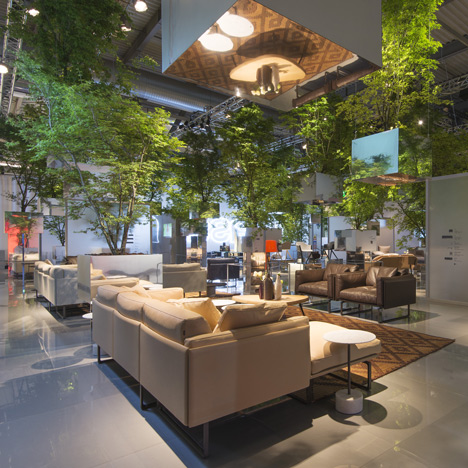 Urquiola has also designed two pieces herself – a sofa named Beam, and an armchair called Gender.

The Gender armchair gets its name from its "changing identity based on chromatic and material combinations", and it is made up of two "masculine and feminine" independent shapes that together create one form.

"I'm very encouraged to see which the public will understand more, feminine or masculine," said Urquiola. "I think its time to blend gender."

"There are many sides to society, not only woman and man, and we have to approach these situations in a better way," she added.

A collection of mirrors by Ron Gilad are intended to provide a clear reference to the contemporary art world, while a chair by Ora ïto is described as "simplex" – a term coined by the designer for giving apparent simplicity to an object made from complex workmanship.

"It is very interesting to evolve the company with different dialogues," said Urquiola. "[We've managed to put] so many things we thought could be difficult together."

The collection is being presented inside a stand designed by Urquiola, which was inspired by the Rietveld Pavilion – a temporary building designed in 1955 by Gerrit Rietveld in Holland to display sculptures.

Mimicking the structure, the stand's walls were constructed from concrete bricks. Inside, products were arranged into types of rooms.

"The intrinsic relationship between architecture and interior design has always been an important element in Cassina's history," said the brand. "This modern building reflects Cassina's contemporary attitude with its Minimalist, yet immediately recognisable, design."

Cassina's Origins of the Future collection is on show in hall 20 at Salone del Mobile in Milan from 12 to 17 April.

Other pieces launching at the fair include a set of tables referencing Minimalist sculpture by Swedish studio Claesson Koivisto Rune, and a range of desks by London studio Industrial Facility based on park benches.

Also during this year's Milan design week, Urquiola is exhibiting a cabinet with stained-glass doors – part of a trend for coloured glass.

Her other recent projects include a bathtub supported by steel tubes and the interior of watch brand Panerai's first US flagship store.