A retrospective of work by Finnish designer Eero Aarnio, a pioneer of high-quality plastic furniture and creator of some of the most iconic chairs of the 1960s, has opened at the Helsinki Design Museum. Dezeen spoke to the exhibition's curator about how Aarnio broke with the "traditional Bauhaus Nordic functional style" (+ movie).

The exhibition coincides with Aarnio's 84th birthday and celebrates his 50-year long career, which began during the 1960s in a period of political progression and economic expansion in Finland. 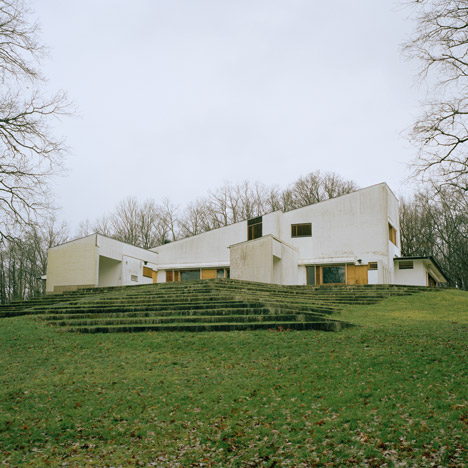 "The first groundbreaking piece from him was a chair that took the shape of a ball," said Saloniemi. "That is quite something if you compare it with Alvar Aalto and the Modernist heritage."

Aarnio was born in Helsinki in 1932, where he studied at the Institute of Industrial Arts before founding his interiors and industrial design firm in 1962. His company is now based in Veikkola, Finland.

His futuristic-looking plastic furniture focuses on simple geometric shapes, including the iconic Ball Chair and the transparent hanging Bubble Chair. These were Aarnio's first experiments with plastics, which have continued through to his more recent products for brands including Magis, for which he designed the popular Puppy Chair in 2005, and Alessi.

They sit in contrast to the Scandinavian aesthetic and natural materials championed by other Finnish Modernists like Alvar Aalto and Ilmari Tapiovaara.

The Ball Chair, produced in 1965, became a pop culture design icon almost instantly, even appearing on the evening news after it was shown at Cologne's International Furniture Fair in 1966. Despite this, Saloniemi told Dezeen that Aarnio himself rejects the "pop" and "space age" labels, and insists he designs functional objects first and foremost.

"Eero always says they don't have anything to do with pop or space age," Saloniemi said. "He didn't want to design some futuristic spaceship furniture or anything. He is quite strict about this."

"He is always designing very practical furniture and products, and they might look like curves, toys or artwork, yet they are very functional designed objects," she added.

As part of the show some of Aarnio's designs are displayed on moving platforms that have been designed by Florencia Colombo and Ville Kokkonen, shown in the movie above.

Eero Aarnio is on show at the Helsinki Design Museum until 25 September 2016.

Dezeen spoke to Saloniemi about some of the key designs featured in the exhibition:

When Aarnio applied to the Institute of Industrial Arts, Helsinki in 1954, he was asked to draw or paint a person sitting in a chair as part of an entrance test.

"Eero was like 'Oh my God, I can't draw a person', so he actually painted a person reading a huge newspaper in what is a little bit like a ball-shaped chair," Saloniemi told Dezeen. "That helped him to just allow just the feet and the hands to be visible, everything else was hidden by the chair and the newspaper. This was the first time that the Ball Chair was detected in his work."

Aario began his career with a simple rattan school, which he created in 1954 and is still in production.

"It was christmas time and Eero was spending christmas with his wife Pirkko [Attila]'s family," said Saloniemi. "Pirkko's father suggested maybe he should try out this rattan weaving. So Eero started making a basket, and when he finished it he turned it upside down and realised that it could be a stool. That is how it started."

"The rattan stool was created for Asko in the 1960s, which used to be the biggest furniture company in Finland, and between 1960 and 1963, he designed four different rattan stool models."

Aarnio's futuristic-looking Ball Chair, which he designed in 1963 is the product that transformed Aarnio into an international designer. It has appeared on many magazine covers, in films, TV shows and in almost every 20th-century design guide.

"It is considered to be in the top 10 best-known international Modern design chairs," Saloniemi told Dezeen. "Show the image of the Ball design to anybody and they have seen it."

"The significance of Ball as a design object is that a chair with such shape had never been created before," she added. "With the use of fibreglass, the optimal shape is a ball, so the ball shape is the pinnacle, or perfection of fibre design, one could say."

Aarnio created the first version of the Ball Chair by hand, by layering wet paper on a plywood mould to create the shell, and then covered the surface with fibreglass, sanded it and added a metal ring to the mouth.

"The production of the chair starts with a factory mould," said Saloniemi. "It looks very sketchy on the outside but it has a super-clean, immaculate surface inside. The person who works with the Ball Chair starts to coat the mould with the fibre, then resin, and does this until the thickness is enough. It will then be polished and there will be an aluminium leg put through the ball because that is the sturdiest one. That is actually how we point out what is a copy of the Ball Chair, many of the copies have a plastic leg. Then of course it will be painted."

Aarnio's Ball Chair was debuted by Asko at the International Furniture Fair in Cologne, Germany in 1966 and was such a success it even appeared on the evening news.

"The next fair was in 1968 and they were bringing the Ball Chair to the booth and Eero felt so sorry about the fact that chair is quite large in diameter so it meant that in the transport there was a lot of extra empty space within the chair," Saloniemi said. "He was thinking how can we fill this space so it doesn't go in vein, so he created a chair that ended up being a Pastil. The Pastil was exactly the size of the mouth of the Ball Chair."

"What happened next was that Eero was reading, or trying to read in the Ball Chair, and he realised it was dark," Saloniemi told Dezeen. "How could he enjoy reading in the Ball Chair? Should he install some kind of lamp inside it or could it be made out of a transparent material? Then he invented the acrylic version – the Bubble Chair."

"The Bubble is a piece of acrylic plate when its pressed with the metallic ring that goes along the mouth," she added. "Then it is blown like a soap bubble downwards, and gradually it reaches its shape and height."

Sketch of the unrealised Nest Chair, 1982

"My favourite piece in the show is a sketch, and it is a sketch that is 140 centimetres wide and 90 centimetres high, Eero always drew in that 1:1 scale," Saloniemi told Dezeen. "It is a sketch of a huge hairy chair. It is from 1982 and has never been in production."

"It is a little bit like a tomato," she added. "If you imagine furry hair on top of a tomato; it looks very comfortable."

"Eero designed Pony in 1973, it has been referred to as an adult toy," Saloniemi told Dezeen. "Not toy seat, but a seat toy. Eero always says its not a chair, it's a seat. And that's been important to him. That's because Eero has a playfulness and humour in him, which has been central to his creativity and practice, always."

Aarnio designed another animal figure more recently – Puppy, in 2005, for Magis. "What is interesting with Puppy is that it's related with the second coming of Eero which he experienced in the beginning of 2000, in the millennium," said Saloniemi.