Opening to the public this weekend, the addition provides over 3,000 square metres of new gallery and events space for the museum, which houses one of the most important art collections in Switzerland.

Christ & Gantenbein – who was selected for the project in 2009, ahead of architects including Zaha Hadid and Tadao Ando – designed the building to be contemporary, but to also "speak the same language" as the main 1930s building, which is located across the street.

To achieve this, the architects developed a design that mimics the scale and proportions of its neighbour.

The roof level is identical, window heights match, and the grey brickwork complements the monochrome stonework.

The differences are in the details. Instead of a decorative arcade, a simple glazed wall forms the entrance.

And while windows on the main building form an ordered grid, on the new building they are added more sparingly.

"We understand it as neither a repetition nor a copy of the main building, but rather as an emphatically contemporary, forward-looking building capable of accommodating completely new forms of art and the engagement with it," said Christ & Gantenbein.

Different shades of grey break up the monotony of the brickwork, forming a soft graduation from dark to light.

These self-supporting walls integrate strips of LED lights, sunken into a series of grooves, which can be used to spell out the names of current exhibitions.

"The frieze, in its archetypal form, has always been part of the traditional architectural canon, but in the form it takes here it represents something quite new," explained the architects.

"The result is a visually stimulating effect as the archaic-looking masonry begins to shine or, at a lower power setting, to glow."

Other nods to the old building include a recessed corner, envisioned as a gesture of welcome, that frames the entrance forecourt. 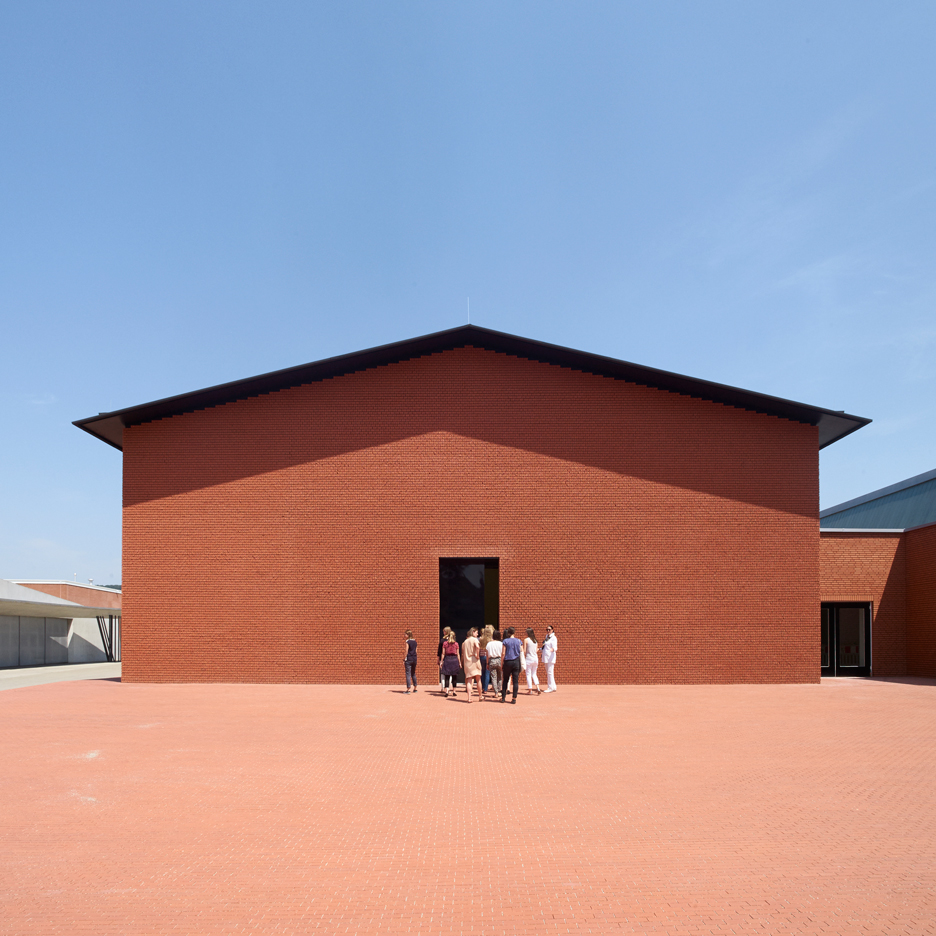 Inside, the building comprises four public floors – three above ground and one below. These are all connected by the central staircase, which the architects describe as a "free and expressive figure in space".

Grey-veined Carrara marble provides the staircase treads, and the walls are finished in roughly scraped plaster. Overhead, a round skylight allows daylight to filter all the way down to the basement.

At the base of the staircase, the space extends out beneath the road to provide a connection with the main building.

"The actual connection between the main and new buildings beneath the road is not so much an underpass as an ensemble of large open spaces leading into a generous hall that is foyer, gallery, stage, experimental space, auditorium, and function room rolled into one," added the team.

The galleries themselves vary in size, and are all rectangular in shape.

"On average, the galleries in the new building are a good deal larger and hence more flexible than those in the old building, while still hewing to classical expectations of what museum spaces should be like: serene and restrained, agreeably proportioned, and made of timeless materials," added Christ & Gantenbein.

"These are spaces that allow art to take centre stage."

The Kunstmuseum Basel's main building was designed by two architects – Paul Bonatz from Stuttgart and Basel-based Rudolf Christ, who is in fact the great-uncle of Christ & Gantenbein co-founder Emanuel Christ.

Christ and partner Christoph Gantenbein were relatively unknown internationally when they won the commission for the building, but have since completed a new wing for the National Museum Zurich.

They also were part of the star-studded lineup of architects involved in the Ruta del Peregrino project in Jalisco, Mexico.

Both the new building and the refurbished main building officially open to the public this weekend with the exhibition Sculpture on the Move, dedicated to sculpture from the end of the second world war up to the present day.