Toyo Ito & Associates designed the Museo Internacional del Barroco (MIB) for a plot on the edge of a park near the city of Puebla. It hosts examples of Baroque art ranging from painting, sculpture and fashion to architecture, music, theatre, literature and food.

Fluted slabs white concrete with a bush-hammered finish forms the walls, while a crescent-shaped pond wraps the building, intended to create a visual connection with the park. 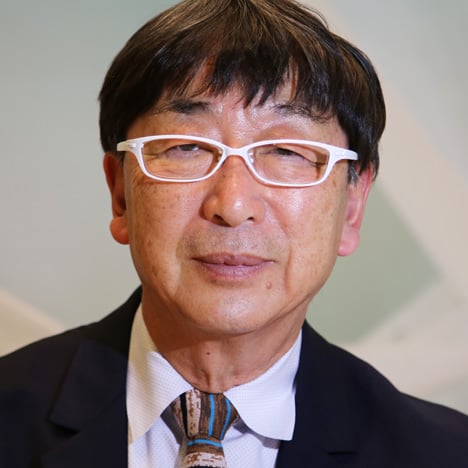 Terraces overlook the adjacent greenery, while galleries are arranged around a central courtyard covered in a thin film of water by a fountain.

The studio, whose founder was awarded the Pritzker Prize in 2013, said its aim was for every aspect of the design to emphasis the relationship between humans and nature.

"Conceptually we want the building to sprout from the earth like spring water and grow," it explained.

A bridge links the museum with a large plaza furnished with pock-marked benches, which is used as a passenger drop-off point, but also forms a viewing spot for nighttime projections across the building's facade.

Inside, there are floors and a mezzanine level with a combined area of just over 18,000 square metres.

Permanent and temporary exhibitions are largely located at ground level around the central courtyard, alongside a 300-seat auditorium, a ticket office, a cloakroom, an information centre and a museum shop.

The permanent collection is housed in eight themed exhibition halls, showing the Baroque influence on fidderent cultural disciplines. Temporary exhibits are set in a suite of three rooms that can be used separately or merged into a single hall.

Back-of-house functions are arranged along the eastern side of the building, with loading and unloading bays located on at ground level and linked by a high-capacity lift to humidity- and temperature-controlled collection storage facilities on the upper floor.

The first floor also houses offices, research and education rooms, where visitors can watch the restoration of Baroque art works or refer to original documents in the library. There is also the International Baroque Saloon for visiting experts, and a restaurant and terrace where visitors can sample Baroque dishes.

A two-storey car park with space for 440 cars, four buses, 42 motorcycles and 50 bikes is also located on the eastern side of the site.

Ito's team set themselves three guidelines to help their design embody aspects of the 17th-century Baroque movement, which saw artists breaking away from the strict rules imposed by the Renaissance period that had come before.

Firstly, they set about dissolving rigid order by using curving rather than flat concrete slabs to create fluidity between galleries.

The second consideration was light – an important aspect in Baroque painting, where typically shadowy scenes are spotlit by intense light. The team replicated this effect using circular skylights, which they liken to rosary beans.

"In plan which at first glance looks like a maze, we see that each room is connected to the next by a light dome that joins them like rosary beads," said the team. "Visitors can experience the light that literally falls from the sky, as if a dialogue between man and nature is taking place."

As the museum is located in the city's Metropolitan Park, the third consideration for the design was environment. The building harvests and treats both rainwater and sewage, and once cleaned, is used to feed the pond that wraps around the the museum and visually connects it with the park.

"The MIB will be a cultural meeting centre, not only for Mexico but embodies international ambitions. People from around the world will gather here and exchange their thoughts and reflections," added the studio.

Toyo Ito set up his Tokyo studio in 1971. The architect has won numerous architectural awards, including the Pritzker Prize, the RIBA Gold Medal and the Praemium Imperiale.

Among the most recognisable forms of his architecture are the ribbed structure of the Dome in Odate and the undulating white roof of the Meiso no Mori Municipal Funeral Hall.

More recent works include the Tama Art University Library and Za-Koenji Public Theatre – both in Tokyo. He also received a Golden Lion at the 2012 Venice Architecture Biennale as part of his exhibition in the Japanese Pavilion.

Photography is by Patrick Lopez Jaimes.