The house Kenzo Tange designed for himself, a U-shaped residence by Toyo Ito and Atelier Bow-Wow's house-cum-studio are all on show as part of an exhibition about Japan's post-war houses at the MAXXI museum in Rome.

The projects come from three generations of Japanese architects. They range the world-famous names like Tange, Ito, and Shigeru Ban, to cult figures like Seiichi Shirai, and Kazuo Shinohara, as well as promising young designers.

Works by non-architects are also included to provide a broader view of Japanese culture.

Co-curator Pippo Ciorra said the show offers an insight into how Japan's domestic spaces have developed over the last 70 years, and highlights the "unprecedented examples of dialogue between tradition and avant-garde".

"It focuses on two main aspects of Japanese architecture," Ciorra told Dezeen. "The first is the design of the single-family house as the main element shaping people's and cities' life."

"The second is the geography of genealogies we can find only in Japan, which drives both the transition from masters to younger designers, and the specific Japanese relation between tradition and modernity."

The exhibition forms part of a series investigating the radical post-war architecture of Europe and Japan.

It was initiated by the Japan Foundation to celebrate 150 years of diplomatic collaboration between Japan and Italy, and the concept was then developed by Atelier Bow-Wow co-founder Yoshiharu Tsukamoto and Kenjiro Hosaka from Tokyo's National Museum of Modern Art.

Ciorra curated the content in collaboration with Hosaka and Florence Ostende, curator at London's Barbican Centre.

Read on for detailed descriptions from Ciorra of some of the headline projects:

Kenzo Tange's own house formed an early instance of his synthesis of Japanese history with the expressive vitality of late modernism. The building was raised dramatically above the ground, a device which recalls the piloti of the international style and the raised platforms of the paradigmatic classics of Japanese architectural history.

In an explicit rejection of the western arrangement of domestic spaces, it consisted of one undivided, tatami-floored room furnished with a mixture of Japanese-style objects and mid-century American furniture. The abstract grid of Tange's plan forms an eloquent argument for the idea that in Japan, tradition was already modern.

In the post-war period, Japan underwent a significant population boom which led to increased pressure on urban space. Takamitsu Azuma, desiring to live in the centre of the city could only afford a 20-square-metre plot on an awkward, triangular site.

Because the traditional horizontal orientation of Japanese homes was impossible Azuma stacked the internal rooms one on top of the other. The interior is one continuous space arranged around a spiral staircase – there are no doors or internal walls. The rough concrete textures exposed throughout gives the house a defensive quality, rendering it an embodiment of the architect's desire to live in the city.

The core of the house was a soil-floored courtyard, around which was wrapped a tubular space. The house lacked a facade, presenting a curved concrete wall to the street. Light was introduced into the interior through skylights and a glass sliding door leading to the courtyard, allowing for the elimination of exterior windows.

The borders between walls and ceiling were plastered in order to create a continuous curved surface throughout, conveying a sense of immateriality and even infinity. The smooth, immersive whiteness of the interior was variated through striking shadows created by industrial spotlights at various points.

The Roof House was built for a family with young children that had enjoyed spending time on the roof of their former home and therefore requested this unusual engagement with the architecture as the basis of the new design.

The single storey house is topped with a large roof that performs as the house's primary space and a viewing platform. Projecting over the ground floor, it also provides an engawa-like zone beneath the eaves. Like much of the architects' work, the house explores the ways users can imaginatively engage with the environment.

In the early 21st century, Atelier Bow-Wow identified a trend by which Tokyo houses could be divided into three generation. Since the 1920s, that entailed a "spiral of intolerance", causing houses to become introverted places which severed the nuclear family from the wider community.

Their house and office establishes a new direction for the fourth generation house, which is characterised as a more public-facing building type. The thin partition walls soften the distinction between building and street and between the domestic and office spaces within. The domestic spaces occupy the upper levels and are accessible only through the principal staircase.

The project was designed for a client who had made the unusual decision to stop working, and therefore wanted a portion of the house to be utilised as profit-making rental units. This initial brief led the architect to fragment the house into a number of distinct units separated by garden spaces, and this decomposition became the determining motivation of the design.

The house is formed of 10 units, the largest of which is three floors, the smallest housing only a shower, going from an architectural to a bodily scale. In most cases, except for a couple of glass passages, to go from one room to another, the residents must pass through an exterior public space, which lacks any border from the street. 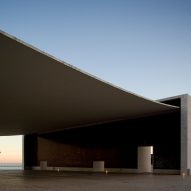 Dezeen's top 10 architecture and design exhibitions coming up in 2017