Milan 2016: in our next movie from Nike's The Nature of Motion exhibition, architect Greg Lynn explains how his body temperature-regulating chair could help athletes significantly improve their performance.

Nike's The Nature of Motion exhibition presented installations by an array of international designers exploring the concept of movement.

Lynn presented a high-tech carbon-fibre chair with embedded electronics, which is designed to cool and heat athletes between periods of exercise.

"This piece of equipment has sensing technology, heating, cooling and air built into it that allows us to control the state of an athlete," Lynn explains in the movie, which Dezeen produced for Nike.

The chair is designed for sports that involve intense bursts of exercise followed by short periods of rest, such as basketball where rolling substitutions can be made at any point throughout the game.

"For certain sports, where you go in and out, it's advantageous to build a little microclimate around a player," Lynn says. 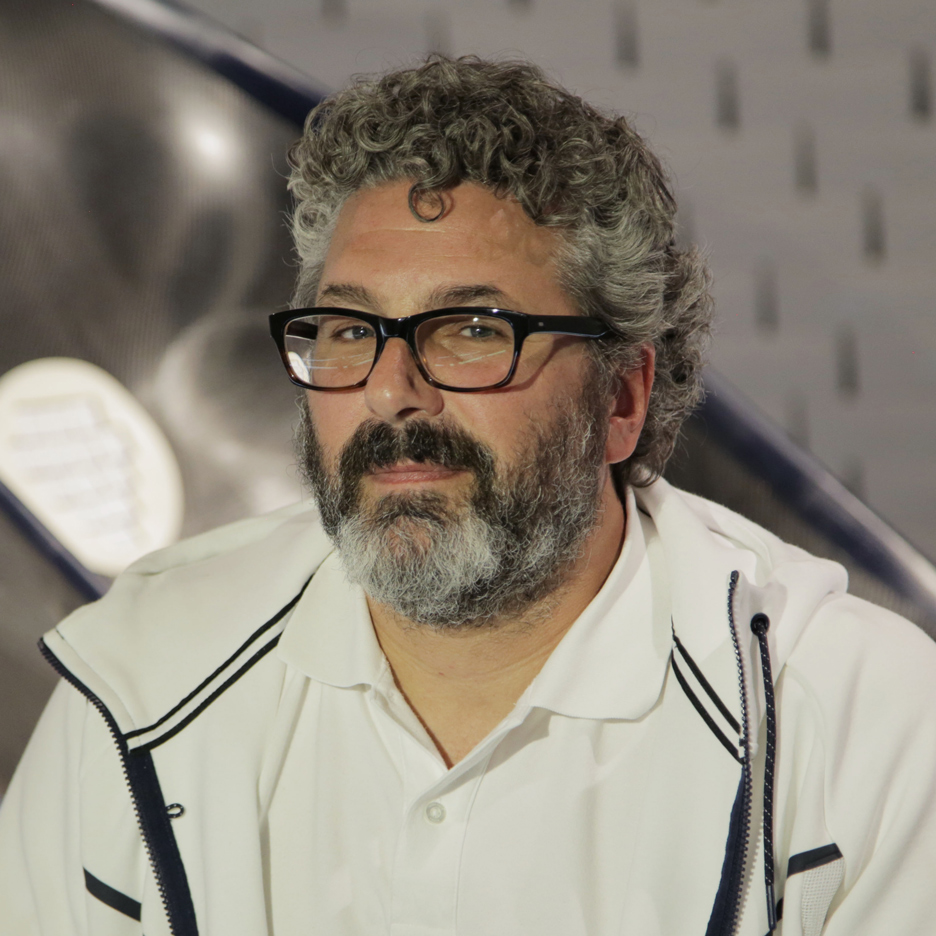 Design brands must integrate tech into their furniture or disappear, says Greg Lynn

"If you gave five of these chairs to a college basketball team, they would have a distinct performance advantage over another team that didn't have them."

The chair features around 70 Peltier thermoelectric pads, which cool down or heat up depending on the direction of the current running through them. This allows the chair to reduce an athlete's core body temperature while keeping certain muscles warm.

"Down the spinal column is a great place to put a lot of cooling, but for the muscle groups of the thighs and the calves, we don't want to let those get cold because they immediately contract," Lynn explains.

"So while we are bringing down the temperature of someone sitting in the chair, we are actually warming up their legs."

The chair also features a perforated tube around the rim, which blows a gentle current of air over the athlete.

"Air diffuses across the surface of the chair to take humidity off of an athlete, so they stay fresh to go back into the game," Lynn says.

Lynn presented a working prototype of the chair at the exhibition, with a thermal imaging camera showing visitors how it alters the body temperature of people sitting in it.

Lynn isn't planning on developing the concept further, but hopes that presenting the chair in Milan will provoke other companies to further investigate the possibilities.

"This isn't something I would expect somebody to buy," he says. "It's more about how you think about design, intelligence, information and systems, in the world of furniture and ergonomics."

He hopes that furniture companies will start to think about how they can embed technology into their products, after failing to keep up with consumer expectations.

"At Salone del Mobile 10 years ago, people would look at this chair and they would talk about style purely in terms of material and shape," he says. "Now I hope people will understand that this is a chair that's thinking about technology, performance and sport. Maybe there's something to be done in that arena."

This movie was filmed by Dezeen in Milan for Nike. It is the third in a series of movies looking at the work presented in The Nature of Motion exhibition, which we are publishing over the coming weeks.

In the first movie in the series, Nike's vice president of global design John Hoke introduces the show and explains why putting on an exhibition during Milan Design Week is important for the sportswear giant.