UK design graduate Sam Wrigley has launched a collection of designs that aim to make flat-pack furniture even more adaptable and easy to move (+ slideshow).

Wrigley's Crisscross range of modular cupboards, wardrobes, a bedside table and desk is designed to cater to the needs of students, travellers and 'generation rent', who may have to relocate often.

The furniture is assembled using modules that are slotted into pre-existing holes in the boards and can be fixed in place without the use of any tools, allowing them to be easily removed and reused.

"Our goal is to make furniture that fits people’s lives perfectly – wherever they go," said Wrigley, who is a recent graduate of Falmouth University in Cornwall.

"We want to take on the big boys and reinvent flat-pack furniture, because moving should be less of a headache and more exciting," he told Dezeen.

Crisscross's removable metal assembly modules consist of a bracket and a locknut, which hold the panels of the furniture together.

In order to withstand frequent use and disassembly, the brackets, hinges and locknuts are made from high-grade aluminium that is anodised black, while the boards are made from solid birch plywood, cut on high-precision CNC routing machines for uniformity.

The wood comes from sustainable FSC-certified forests and is coated in natural, child-friendly wood wax in one of four finishes – red, grey, black or natural. 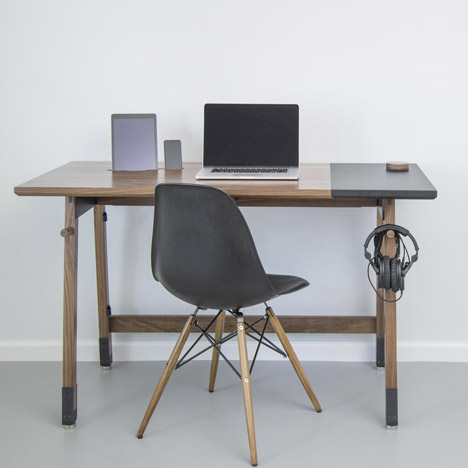 Wrigley came up with the idea for Crisscross in his final year at Falmouth University in 2015 and has been developing and prototyping the designs for the past nine months.

Following a Kickstarter campaign that is to launch on May 17, the plan for Crisscross is to release add-ons that increase the modularity of the initial range.

"It'll mean that Crisscross will get more and more adaptable as time goes on," said Wrigley. "You'll be able to add new modules whenever you need them. Think hooks, mirrors, and towel rails."

While an increasing number of companies are entering the flat-pack furniture space, Crisscross is distinguished by its aims to be both modular and easy to construct and deconstruct, like Lego.

Rhode Island studio Greycork created a Japanese-American styled living collection last year that emphasised quick-assembly, while Benjamin Vermeulen designed a range that could be held together by super-strong magnets instead of screws and fastenings.

High-end designers have also been experimenting with the flat-pack. During Milan design week this year, French duo Ronan and Erwan Bouroullec unveiled a flat-pack sofa for Danish design brand Hay that can be customised in different combinations of colours, while Normann Copenhagen and Danish designer Hans Horneman presented a range of self-assembly lounge chairs that they claimed "did not involve any compromise with the design".

The leader in the space remains Swedish giant IKEA, whose flat-pack refugee shelters were described by design critic Alice Rawsthorn as being part of "one of the most important design developments of the past decade".